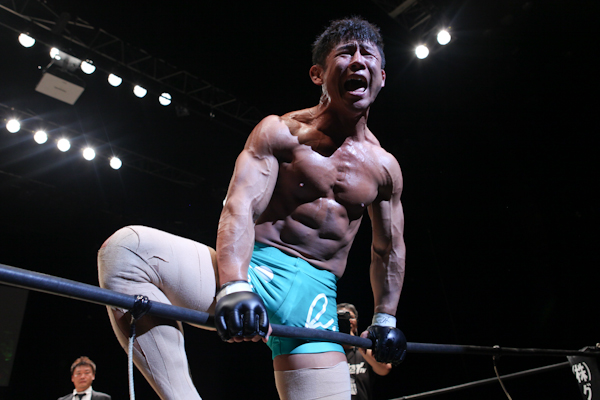 TOKYO -- It was a poor night to defend a title Friday night at Deep “62 Impact” at the TDC Hall, as all three of the promotion's defending champions failed to keep hold of their respective titles.

In the main event, muscle-bound grappler Satoru Kitaoka unseated fellow aggressive submission ace Daisuke Nakamura to take Deep's lightweight crown. Nakamura, known for his go-for-broke grappling style, seemed to be more cautious against the famed leglocker, but was still unable to find an advantageous position throughout the fight. Kitaoka used his massive strength advantage to tie up with the champion and spent most of the match dragging Nakamura around the ring with a tight front headlock and sporadic guillotine attempts. In the final seconds of the fight, Nakamura was able to break free from Kitaoka's grip and tried to engage on the feet, but Kitaoka chose to coast to victory and flopped to the mat repeated amid a shower of boos from the crowd.

Despite his antics late in the game, all five judges scored the bout in Kitaoka’s favor after three rounds, moving his pro MMA mark to 31-12-9. Post-fight, Kitaoka sarcastically thanked the crowd for booing him, stating,“This is martial arts. I just wanted that badly.”

In their wild bantamweight title fight, Daiki Hata avenged his 2006 loss over the Pancrase featherweight title to Yoshiro Maeda with a second round stoppage, stealing Maeda’s Deep title in the process.

Maeda dropped “DJ Taiki” early and imposed his will in the first round, however, as is often the case with Maeda, the second round inevitably turned in a messy, entertaining brawl. Early in the round, Maeda got caught against the ropes and dropped with a left hook from Hata. The champion found his way back to his feet, but Hata stayed in pursuit and after multiple trips to the canvas and back, Maeda found himself trapped under a storm of hammerfists from the challenger. Referee Yoshinori Umeki dove in to stop the fight at the 1:41 mark as Maeda protested through swollen and bloody eyes.

At welterweight, Bellator and Sengoku veteran Dan Hornbuckle returned to Japan after nearly four years to take on champion Yuya Shirai in a grueling title match. Shirai was able to edge out the opening round, taking the Illinois native down and throwing punches from the top. The flow of the fight changed in the following round though, as Hornbuckle was able to initiate takedowns and threaten from the mount and back control. The challenger spent the majority of the final frame glued to Shirai's back, searching for choke, but unable to finish. After the three rounds, all five judges decided the title belonged to Hornbuckle, giving him the unanimous decision win and the championship belt. Photo: Dean Marchand/Sherdog.com
Hornbuckle wore Shirai's blood and then
his gold.
Colorful Japanese mainstay Akihiro Gono stepped out of his brief retirement only to fall victim to a vicious knockout at the hands of welterweight Taisuke Okuno. Gono seemed doomed from the opening bell, when “Goten” came out firing on all cylinders, pushing the UFC and Pride veteran against the ropes with powerful hooks and stalking him around the ring with lowered hands a deranged grin on his face.

Despite the early onslaught, “DJ Gozma” made it into the second frame, where he shocked the crown by dropping the iron-chinned Okuno to his knees with a wild hook.

Okuno pulled through, however, and got back to his feet, crazed grin intact. Not long after, a hard left hook made contact with Gono’s chin, sending him to the canvas and as Umeki waved the fight off at 2:07 of round two.

Former Sengoku featherweight champion Masanori Kanehara made quick work of American Wade Choate in their bantamweight bout, landing a lazy double-leg takedown early and proceeding to mount where he set up a tight arm-triangle choke. Choate did his best to escape, but was forced to tap at 4:14 of the opening round.

Potential flyweight contender Tatsumitsu Wada used his range and angles to take out power-puncher Yusaku Nakamura with a huge right hook at only 2:10 of round one. The win earns Wada the first shot at newly minted flyweight champ Yuki Motoya.

A former Deep champion in two different divisions, Takafumi Otsuka used takedowns to control and outpoint Makoto Kamaya in their bantamweight bout. Despite displaying his usual inability to finish, Otsuka's dominant top game earned him the nod from all three judges, giving him the unanimous decision victory.

Seiji Akao also edged out a unanimous decision victory in his bantamweight match-up with Katsuya Toida, outstriking the veteran and getting the better of grappling exchanges. Following the loss,“Toikatsu”announced his retirement after nearly 15 years in the sport.

At featherweight, Katsunori Tsuda controlled his bout with Shota Shidochi on the feet and on the ground, before dropping him with punches and pounding for the finish at the 2:38 mark of the second round.

Bantamweight Toshinori Tsunemura was able to outgrapple veteran Hirotaka Miyakawa for one and half rounds, before sinking in a fight-ending rear-naked choke at the 2:01 mark of round two.

Daisuke Endo finished Masato Kobayashi with a second round rear-naked choke after battering him with punches in their bantamweight affair, referee Oshiro calling a stop to the fight at 2:23 of the second frame.

In the night’s opening fights, flyweights Takashige Hirukawa and Hideki Kiyota fought to a majority and draw and welterweight Seita Katsuki earned a 29-second KO over Yoshihiko Shinzato.