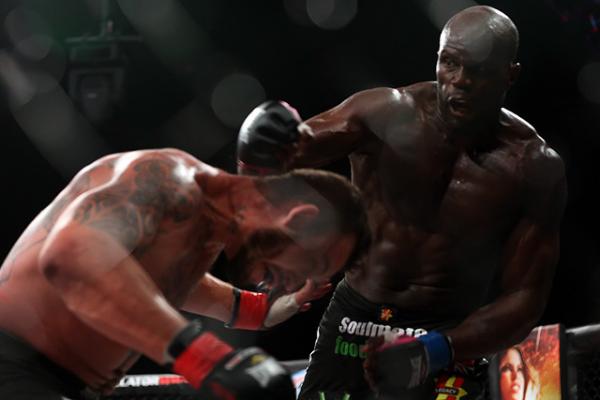 The French kickboxer brutalized Mark Godbeer with a series of knee strikes to the body and head in the Bellator MMA Season 9 heavyweight tournament semifinals at Bellator 102 on Friday at the Visalia Convention Center in Visalia, Calif. Godbeer (8-2, 0-1) succumbed to the blows 2:04 into round two.

In his first appearance outside the Ultimate Fighting Championship in nearly nine years, Kongo (19-8-2, 1-0 Bellator) wore down the Englishman with takedowns and clinches. In the second round, the 38-year-old ducked into the rear waistlock position and attacked Godbeer with knees to the quadriceps and hamstrings. From there, the knees only grew in intensity. Kongo pinned the Trojan Freefighters representative on the cage, targeted his head and body and fired away until referee “Big” John McCarthy intervened.

“I heard my cornerman tell me to knee him everywhere,” Kongo said. “I threw my knee, and I hurt him.” 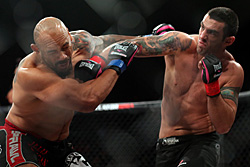 Photo: D. Mandel/Sherdog.com
A right hand knocked Johnson flat.
Team Nogueira’s Vinicius Kappke de Queiroz knocked out Lavar Johnson with a blinding but brutal right hand in the Season 9 heavyweight tournament semifinals. De Queiroz (7-3, 2-1 Bellator) wiped out the monstrous Californian 23 seconds into round one, as he recorded the sixth first-round finish of his 10-fight career.

Moving backward, “Spartan” countered a jab with a right cross to Johnson’s jaw, sending him to the canvas in a face-first dive. A few follow-up blows awakened Johnson (17-8, 0-1 Bellator) from his brief slumber, and though he protested the stoppage, he did not have much of a case.

“I came in here to try and take him out because I know he has very heavy hands,” de Queiroz said. “I have a lot of respect for the guy.” 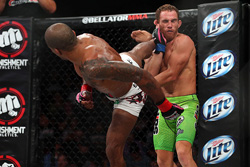 Takedowns and a stifling takedown fueled the Brazilian’s latest conquest, as he repeatedly grounded Leone (13-6, 3-3 Bellator), transitioning to his back in each of the first two rounds.

The American’s offense was limited to occasional overhand rights. His final burst was snuffed out late in round three, where Silva countered a takedown with an immediate reversal and settled back in top position. 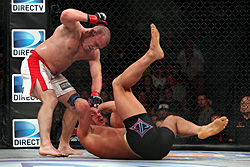 Butcher (7-1, 4-1 Bellator) never got in gear, his 23-year-old counterpart denying his advances at every turn. Parlo did his best work in the second round, where he bloodied the West Virginian’s nose, shut down his takedown attempts and nearly finished him with a punishing volley in the closing seconds.

Needing a stoppage, Butcher did not have enough in the tank to pursue the victory in round three.

“I would like to have finished him,” Parlo said. “It was hard because he was running a lot.” 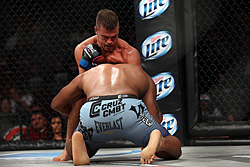 Pacheco started strong, as he delivered a pair of takedowns, threatened with various submissions and moved to full mount in the first round. Ward (8-1, 4-1 Bellator) answered in round two, where he caught the overzealous 28-year-old in a guillotine, switched to a figure-four grip and awaited surrender.

Ward has finished his last three opponents, two of them by submission. 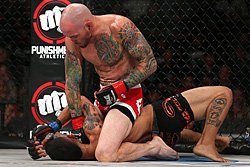 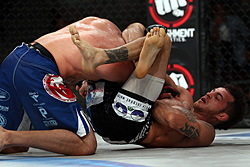 Photo: Dave Mandel/Sherdog.com
Carrizosa tapped out Quesada.
Cain Carrizosa (5-0, 1-0 Bellator) kept his perfect professional record intact, as he submitted Juan Quesada with a triangle choke 4:51 into the second round of their clash at 155 pounds; and Brandon Cash (8-3, 1-0 Bellator) stopped William Richey (10-2, 0-1 Bellator) on a technical knockout after the Maximum Fighting Championship alum quit on his stool prior to the start of the third round of their heavyweight scrap.