SINDELFINGEN, Germany -- It was half-past midnight when Andreas Kraniotakes stepped into the ring at the Glass Palace Saturday night, but it took “Big Daddy” just over three minutes to take out fellow German heavyweight Thorsten Kronz at Tempel Mix Fight Gala 11.

The EA Sports MMA-featured heavyweight was under a lot of pressure before the bout, coming off of back-to-back losses to Gerald Turek and Bjorn Schmiedeberg. However, the 28-year-old’s training camps at Victory MMA in San Diego and Golden Glory in Holland translated into success against Kronz.

Both fighters started off well on the feet, with “Big Daddy” and the “German Oak” trading punches and low kicks. After ducking under a Kronz haymaker, Kraniotakes changed levels and displayed his newly-acquired wrestling skills, planting the 33-year-old banker onto the mat.

From there, it was only a matter of time. The fight ended with a rarity in heavyweight MMA -- a combination of reverse-triangle choke and armbar forced Kronz to tap at 3:24 of the first round. 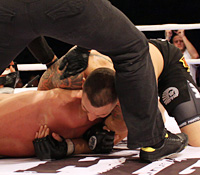 After seeing Carvalho’s improved stand-up, courtesy of his work with Alistair Overeem, Kondraciuk quickly shot on the Brazilian ex-pat, but Carvalho easily sprawled out of his takedown and went to work on the 22-year-old Pole in his domain, the ground game.

After a modified anaconda choke -- dubbed the “BC Choke” by Carvalho -- did not yield the desired results, the nephew of vale tudo legend Edson Carvalho softened Kondraciuk up with some belting punches, before putting him away with a brabo choke
just 2:21 into the fight.

To the surprise and delight of Swedish-based Carvalho, veteran black belt “Chibata” Andre Pinheiro, who had cornered his uncle Edson in his fight against Igor Vovchanchyn 11 years ago, traveled from his adopted home of Switzerland to support the next generation fighter.

“He has been in a lot of my uncle’s fights. It was great having him in my corner and he inspired me a lot on let my BJJ go during the fight,” Carvalho told Sherdog.com after the bout.

The 28-year-old powerhouse also expressed some anger regarding the bout cancellations he has suffered in 2010.

“Fighters are running from me left and right. My management is doing a great job, but nobody wants to fight me,” Carvalho boasted. “I really wished some of the top guys in Europe like Tom Watson or Mamed Khalidov would step up and fight me.” 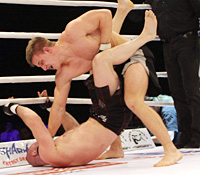 In a bout that was predominantly fought on the ground, Billstein had top control for much of the far-too-short two five-minute rounds. Stringer, however, achieved mount position in both periods, and was the more active party on the ground, landing harder punches from more dominant position.

In the end, a trio of Dutch judges thought Billstein had done enough to win the unanimous nod, despite the fight seeming to be fit for at least an extension round. With the win, the Cologne teenager upped his
record to 9-0.

Sengoku veteran Moise Rimbon delivered a clinical, but uninspired performance against CuraÃ§ao-born, Austria-based Autimio Antonia. Rimbon could not be bothered to either wrap his hands or warm up, but quickly went to work on the 38-year-old striker. The Frenchman ended the bout 4:55 into the first frame, earning the tap with a keylock.

German fixture Mario Stapel earned a first-round stoppage over Italian M-1 veteran Serghei Popa. Stapel did what was expected of him and ended the match via ground-and-pound at 4:14 of the first frame. However, Popa sprung up like a jack-in-the-box following the stoppage to protest the referee’s interference.

In the opening contest of the evening, Dutchman Danny Verhoeven submitted Paul Rockel with a rear-naked choke at 2:51 of the first.