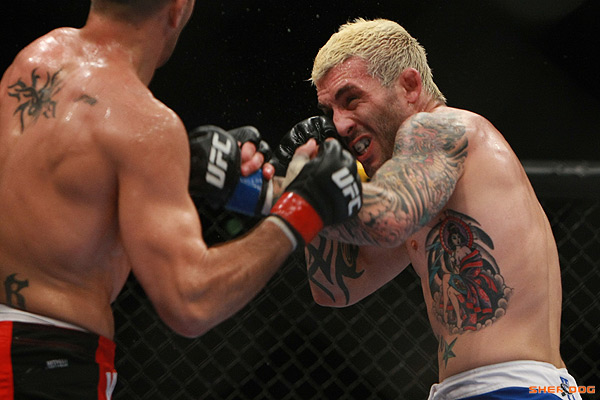 Kurt Pellegrino has suffered a knee injury and will not compete against Marcin Held as expected at Bellator 68.

Sherdog.com learned of the news Tuesday morning from a source close to the contest. The Chicago-based promotion recently announced that Bellator 68 will take place May 11 at Caesars Hotel and Casino in Atlantic City, N.J.

Though the promotion had yet to make the planned bout official, Pellegrino, a New Jersey native, had been widely rumored to fight on the card. It is currently unknown if Held will still compete at the show, which airs live on MTV2 and Epix, delayed on the west coast.

A 12-time UFC veteran, Pellegrino announced his retirement from mixed martial arts following a technical knockout defeat to Patricky Freire at Bellator 59 this past November. The bout marked the first in-cage appearance for “Batman” since exiting the UFC the previous March on the heels of back-to-back defeats to George Sotiropoulos and Gleison Tibau. A New Jersey native, Pellegrino holds 10 of his 16 career victories by submission, and his defeat to the elder “Pitbull” brother stands as his only knockout loss in nearly 10 years as a professional.

Just 20 years old, Held is one of Poland’s brightest prospects. Known for his ground skills, the young gun has earned half of his career wins by submission. Only twice beaten in 14 pro outings, Held suffered a setback in his Bellator debut, falling by arm-triangle choke to future lightweight champion Michael Chandler in the Season 4 tournament quarterfinals one year ago. The Pole rebounded from the loss, however, notching wins over Kaleo Kwan and Phillipe Nover to close out 2011.