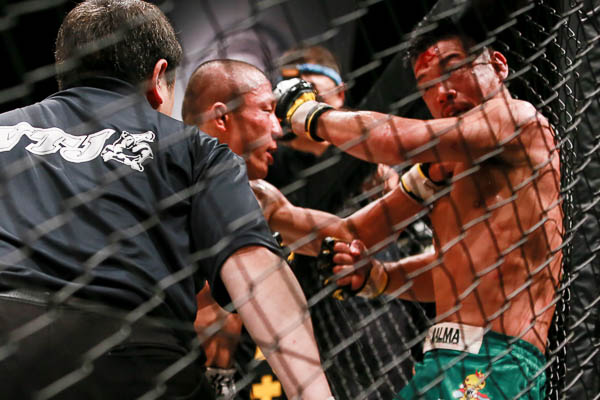 
TOKYO -- Once again proving the merit of five round fights, highly coveted Shooto prospect Kyoji Horiguchi was on the losing end of his 135-pound affair with Shintaro Ishiwatari until pulling off a resounding come-from-behind TKO in the final frame of Vale Tudo Japan 2nd’s main event.

The hard-hitting featherweight King of Pancrase tagged Horiguchi early with a wild left hook, causing the unsteady Shootor to slip on the counter attack. Ishiwatari thus sunk a deep rear-naked choke, sapping the energy from the Krazy Bee product as he fought to escape. 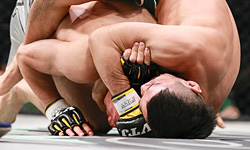 Photo: T. Irei/Sherdog.com
Ishiwatari nearly put away Horiguchi early.
Horiguchi’s situation didn’t improve in subsequent rounds as Ishiwatari soon demonstrated an ability to score takedowns at will. Despite a nearly fight-ending choke of his own in round three, Horiguchi had little answer for Ishiwatari’s superior wrestling.

Dropping rounds one, two, and four, Horiguchi entered the fifth frame apparently bound for a decision loss. The young Shooto prospect dramatically changed the narrative however, catching Ishiwatari cold with a hard right hand and a subsequent flurry of punches.

Although the Pancrasist was still upright, it was clear that he was swinging on autopilot. After an otherwise excessive amount of finishing punches from Horiguchi, referee Toshiharu Suzuki finally waved the fight off at the 0:41 mark.

“I’m sorry I couldn’t perform to my fullest. Really, I’m the one who lost,” an exhausted but happy Horiguchi said in following the fight. “When I go to the UFC, I promise to become stronger.”

Unaccustomed to five rounders, the haggard Horiguchi was unable to fully articulate responses to questions from the Japanese press.

“I couldn’t get inside on him because of his pressure,” said Horiguchi. “He's strong. I’m sorry, I can't talk now. I'm too tired. I just had a five-round fight.”

Horiguchi claimed to have designs on competing in the United States next, though he is currently uncertain on when or how it may happen. 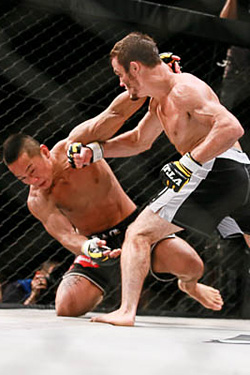 Photo: T. Irei/Sherdog.com
Romero exploded on the “Streetfight Bancho.”
Prior to Horiguchi’s stupendous comeback victory, Gladiator Challenge veteran Daniel Romero dispatched former Dream featherweight champion Hiroyuki Takaya with extreme prejudice in their scintillating 145-pound bout. Exploding out of his corner from the opening horn, Romero immediately set the tone by engaging the WEC veteran in a blistering firefight until a vicious right hook sent the Dream champ down. Romero pursued Takaya to the four-points position, finishing him with a barrage of brutal, under-the-arm punches to the face, forcing referee Kenichi Serizawa to call the bout at 3:21 of round one.

Dream Japan bantamweight grand prix winner Hideo Tokoro tapped out Taylor McCorriston in their 130-pound bout, finishing the American with a nasty heel hook. While McCorriston admirably neutralized much of Tokoro’s first round offense by tying him up on the canvas, it wasn't long before Tokoro took notice of the tape around McCorriston's left leg. Tokoro thus locked up the leg and elicited the tap at 2:34 of the second frame.

In a 145-pound bout, UFC veteran Caol Uno submitted WCFC lightweight champ Anthony Avila. Avila took the fight to Uno in the first, racking up punches on the feet while the former 154-pound Shooto champ snapped kicks to Avila's body. The Japanese fighter proved most dangerous on the ground however, wrestling Avila to the canvas to take side and back mount, where he eventually locked up the rear-naked choke at 1:53 of round three. 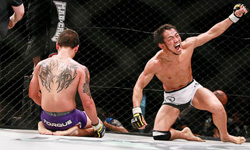 Photo: T. Irei/Sherdog.com
Uno turned back the clock Saturday.
Shooto’s 114-pound champion Mikihito Yamagami celebrated not only his 26th birthday Saturday, but also a majority decision over former 132- and 123-pound champion Mamoru Yamaguchi. Yamagami stole rounds one and two thanks to his superior reach and back control. After a point deduction from an unintentional low blow in round two, a trailing Yamaguchi stepped up the pace to capture the third frame, but it was too little, too late. Judges Minoru Toyonaga and Yuki Nakai gave Yamagami the 29-27 nod, while judge Suzuki was the lone dissenter, scoring a 28-28 draw.

In a measured and defensive effort, Yuta Nezu captured a unanimous decision against Akiyo Nishiura in a 135-pound bout. Peppering his opponent’s legs and body with kicks in the first two rounds, Nezu stayed just out of range of Nishiura's wild, one-hit killshots, earning 30-28, 30-27, and 29-28 scorecards from judges Serizawa, Nakai, and Toyonaga. 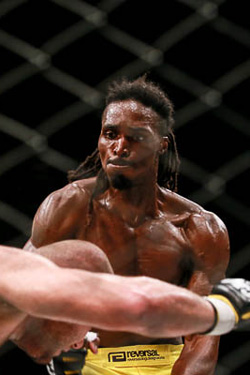 Starting the evening out right, 17-year old AACC product Ryuto Sawada bashed a wily Jo Shishino with a steady stream of punches in their 115-pound bout, until eventually bending Shishino's right arm over his hip for the technical submission at 2:36 of round three.

Finally, in a rare spectacle for Shooto fans, Gabriel Zobo-Lebay fended off the takedown attempts of Lucas Tani in a 215-pound bout, peppering him with punches on the feet to win the unanimous decision (30-28, 30-27, 29-28).