MONTREAL -- Ringside MMA has declared its intent to find Quebec's best up-and-coming talents. Saturday night at Club Soda, the downtown club was packed with 700 fans hoping to catch a glimpse of the next big thing to come out of La Belle Ville at Ringside's "Rising Star."

No glimpses were in sight for the main event, as 290-plus-pound Lenard "L.T." Terrance earned an 83-second stoppage over Robert Masson.

The mountainous Terrance came out stalking, looking to land one big punch from the start. Eventually, Terrance bulled Masson into the cage, as he threw heavy knees but was unable to land clean. After the two were separated for lack of action, Masson indicated to referee Marc-Andre Cote that his pinky finger had been broken, putting an unceremonious halt to the fight just 1:23 in.

However, it was a highly successful night for Team Legion lightweights Yohan Gariepy and Tommy Cote. 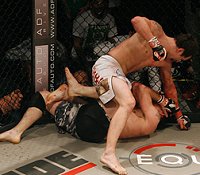 A. Quintero
Yohan Gariepy started slow but
finished in dominant fashion.
Gariepy walked away with the unanimous decision victory over late replacement Jean-Francois Royer, with a trio of 29-28 scores. Originally set to rematch rival Samuel Charbonneau, Gariepy started slow, as Royer got his foe to the ground and threatened with chokes. However, Gariepy picked up the pace in the second and third rounds, forcing Royer to don the crimson mask. Bloodied but unbowed, Royer was tenacious with his takedown attempts in the third, but Gariepy refused to go down, sealing the unanimous decision victory.

Cote indulged Danny St. Gelais on the feet, as the two spent the first 60 seconds of their bout trading leather. It was Cote with the upper hand, forcing St. Gelais to clinch, but the Victoriaville, Quebec, native countered, stunning St. Gelais with an overhand right.

Undaunted, St. Gelais returned with a jumping knee and a right cross of his own. The first round was toe-to-toe power shots being exchanged until the sound of the horn.

After the first round, the bout appeared to be heading St. Gelais' way. After a vicious kick to the body to start round two, the Team Bergeron product started to pick his shots on the fatiguing Cote. In the third frame, St. Gelais was landing at will until, all of a sudden, it happened: a right hook from out of nowhere floored St. Gelais, and Cote pounced for the finish. Unable to pound out his foe from back mount, Cote grabbed an arm and coaxed the come-from-behind tap 2:41 into the final round.

Neither rubber guard nor flashy kicking offense could help Maxim Fecteau against Stephane Pelletier in their bantamweight tilt. Pelletier elbowed through Fecteau's rubber guard attempts and busted the Joliette, Quebec, native's face. In the second round, Fecteau came out with crescent and spinning hook kicks, but a hard right cross from Pelletier put him on the mat. Though Fecteau survived Pelletier's follow-up, the ringside physician was summoned shortly afterward and the bloodied Fecteau was stopped 1:44 into the second stanza. 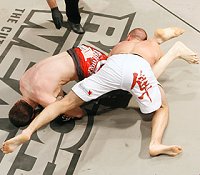 A. Quintero
Tommy Cote pulled off a thrilling
comeback in the third.

Heavyweights Jeff Breau and Martin Trempe had the Club Soda crowd on its feet for the entire duration of their fight, swinging from the opening horn. Two hard right hands from Trempe had Breau wobbled early, but the Team Bergeron product turned it around quickly, landing a Hail Mary overhand right on the chin that dropped Trempe in a flash.

Eventually, Breau went old school, digging his fingers into Breau's eyes to slow him down. Despite Trempre being warned for the infraction, Breau finished the job himself. A brutal kick to the ribs dropped Trempe in a heap with no desire to continue at 2:38 of the opening round.

Xtreme Couture Toronto lightweight Albert Cheng ran his record to 2-0 with a unanimous decision win over Taylor Solomon. Cheng utilized his superior takedowns from within the clinch to nullify the stand-up game of his taller opponent. Apart from a late spell in the second round when Solomon took Cheng's back and unloaded punches until the bell, Cheng controlled the bout with a conservative top game en route to earning three 30-27 tallies.

In the opening bout of the evening, bantamweight Maxime Dubois took Eric Daigneault's back and pounded away until he cinched a rear-naked choke, finishing at 3:50 of the first round.