LaRosa (19-2) found early success in round one with a takedown and by gaining Hashi’s back. However, she was reversed shortly after and Hashi (13-3) was able to keep top position without landing any significant damage through the rest of the frame.

In round two, the fighters played the clinch game for a while, putting each other against the cage. When they separated, LaRosa was able to land more effective strikes.

In the third, after stopping Hashi’s takedown attempts, LaRosa was finally able to get one of her own. She then took Hashi’s back again and secured a rear-naked choke. However, the stanza was coming to an end and the bell likely saved the Strikeforce veteran from a fight-ending choke.

LaRosa seemed to gain confidence in her stand up in the fourth stanza and was able to land more without fear of Hashi’s clinch game. The Wajutsu Keishukai product was game for the stand up war but appeared to be more on the receiving end. 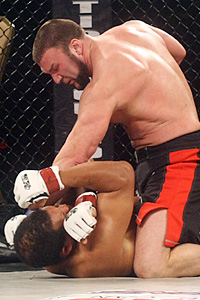 K. Mills
Hinkle (top) vs. Jordan
Sensing she was down in the fight, Hashi came out the aggressor in the final period and took LaRosa right to the fencing with a clinch. Hashi was able to score a trip, but the Philadelphia Fight Factory athlete defended well and brought the fight back to the feet. After a scramble, LaRosa got her back again, but Hashi defended well and managed to take the top position.

In a heavyweight battle pitting UFC veterans against one another, Branden Lee Hinkle was able to take Kevin Jordan early and use his superior wrestling skills to keep him there.

After advancing to the mount twice, Hinkle (15-10, 1 NC) pounded Jordan until he turned on his side, forcing referee Donnie Carolei to stop the bout due to unanswered strikes. It was Hinkle’s first fight in over 19 months and ring rust did not appear to hinder his opponent.

After three hard-fought rounds, UFC vet Chris Liguori (12-8) was able to outpoint Ring of Combat veteran John Salgado (3-4-1) by winning every round on each of the judges’ scorecards.

Also on the main card, Rafaello Oliveira (12-3) won his second in a row outside the UFC with a first round rear-naked choke submission of local favorite Kevin Roddy (9-11-1, 1 NC). The end came at the 4:46 mark.

In preliminary action, Tenyeh Dixon defeated Eric Moon with a rear-naked choke at 2:33 of round one; Jeremy Anderson submitted Biff Walizer with a slick RNC in 3:17 of the first; Jonathan Helwig tapped Lewis Pascavage in the first round with a head-and-arm choke at 2:04; James Jones took a unanimous decision over Ran Weathers; Darnell Hooker needed only 1:34 to dispatch of Steve McCabe with a RNC and Piotr Andrejko slipped by Zachary Sanders via split decision.