Boos cascaded down upon Bobby Lashley as he tentatively raised his hand. Even in victory, the former World Wrestling Entertainment superstar could do little to quiet his critics.

Lashley looked like a million bucks in the first round, as he delivered a slam takedown inside the first half minute and unleashed a brutal package of ground-and-pound -- forearms, punches, hammerfists and elbows -- that left Ott looking like a victim in a low-budget horror film. Still, his failure to finish led to exhaustion and opened the door for his detractors, who have questioned his commitment to MMA.

Winded by a pace he could not maintain, Lashley faded dramatically in the second round and could barely stand in the third. Even so, he managed to drive the fight to the ground, where he punished his undersized foe with thudding blows from the top. Ott fought valiantly from the bottom and even opened a cut above Lashley’s left eye, but he could not prevent the inevitable.

In the co-feature, Aaron Rosa did what former UFC heavyweight champion Tim Sylvia could not and turned away “The Ultimate Fighter” Season 10 alum Abe Wagner with a second-round rear-naked choke. Wagner surrendered 35 seconds into round two. 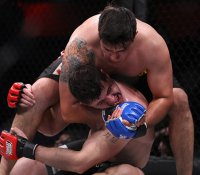 K. Mills
Rosa choked Wagner.
Rosa won a wild early exchange between the two, secured a takedown and worked diligently from half guard, grinding down his foe with short punches and elbows. Within the first 15 seconds of round two, he leveled Wagner with a brutal left hook, pounced with hammerfists and wheeled around to his back. Soon after, Rosa cinched the choke and waited for the tapout from Wagner, whose 32-second knockout against Sylvia two months earlier quickly became a distant memory.

Meanwhile, Phil Baroni put the brakes on a three-fight losing streak and kept himself relevant on the regional circuit, as he took a unanimous decision from Nick Nolte in a featured middleweight bout. All three judges sided with Baroni: 29-28, 30-27 and 29-28.

Baroni weathered Nolte on the feet and scored with takedowns in all three rounds, sinking his teeth into the match with superior top control and occasional ground-and-pound. His big-fight experience paid dividends in this one, as his gas tank ran dry during the last half of the fight. Mettle kept Baroni afloat. Having returned to his roots at the American Kickboxing Academy in San Jose, Calif., the charismatic 34-year-old picked up his first victory since September 2008.

Baroni and Lashley were not the only favorites forced to go the distance. 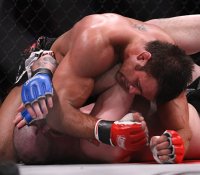 K. Mills
Baroni tired, but still got the
W over Nolte.
Bellator Fighting Championships alum Eric Marriott won for the 12th time in 14 outings, as he dominated and controlled Topeka, Kan.-based Brazilian Willian de Souza en route to a unanimous decision. All three judges scored it 30-27 for the 25-year-old Marriott, who improved to 2-0 inside the TFC promotion.

Marriott dictated the pace and direction of the match from the outset, scoring with thudding leg kicks, knees from the clinch and crisp combinations. De Souza tried desperately to induce a ground battle, but Marriott was up to the challenge and determined to keep himself upright. He grew more aggressive as the fight deepened and put clean three- and four-strike combinations together in the third round, where his advantage became even more evident.

Elsewhere, the well-traveled Alonzo Martinez survived a third-round surge from Aaron Derrow and notched a majority decision in their lightweight firefight. Two of the three cageside judges, Mike Munoz and Henry Gueary, scored it 29-28 for Martinez. A third, Mike Boyd, ruled it a 28-28 draw.

Martinez controlled rounds one and two with strategic takedowns, sporadic ground-and-pound and timely overhand rights. Derrow turned the tide in the third round, as he popped and dropped Martinez with a straight right hand. The lanky K2L Grindhouse representative nearly finished it three times over the final five minutes and appeared to have a tight rear-naked choke in place with roughly 60 seconds to go. However, Martinez survived, spun into Derrow’s guard and freed himself from danger.

The defeat snapped a career-best five-fight winning streak for Derrow, who had choked UFC veteran Rich Clementi unconscious in a stunning upset two months ago. 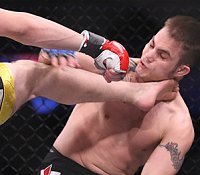 WEC veteran James Krause made his play for the highlight reel, as he stopped Nathan Schut on a beautiful head kick and follow-up punches 41 seconds into round one of their match. The 25-year-old Krause put foot to face and scored his quickest finish in nearly three years.

Krause’s teammate, Anthony Gutierrez, tried to steal some of his thunder, as he submitted Jon Hollis with a first-round triangle choke. The end came 4:20 into round one after Hollis landed a reckless takedown and all but fed himself into the fight-ending choke.

Training out of ATT Altitude, Isidro “Chilo” Gonzalez started off the show’s professional lineup with a bang. With Lashley in his corner, Gonzalez quickly took down Travis Sveum and pounded out the MMA Center product just 51 seconds into their middleweight bout.

In amateur action, Marques Jackson put away Cody Sherwood with a rear-naked choke 2:57 into their middleweight contest, while Laura Marcusse secured a rear-naked choke of her own 1:50 into the second frame of her 110-pound duel with Emily Reed.

Keith Mills contributed to this report.