Bobby Lashley fought with brains and brawn, and Bob Sapp could not keep up in the featured bout at Fight Force International “Ultimate Chaos.”

The unbeaten Lashley took down Sapp in the opening seconds and grinded away with ground-and-pound until the larger-than-life Pride Fighting Championships and K-1 veteran tapped out to strikes 3:17 into round one on Saturday at the Mississippi Gulf Coast Coliseum in Biloxi, Miss.

Lashley (4-0), who promised to fight Sapp standing in the pre-fight buildup, instead took the more intelligent route to victory.

“Going out there against somebody like Bob, you’ve got to be prepared,” Lashley said. “I just wanted to get him down. I had to go out there take him down, cover him up, keep him flat and pound on him. That was our gameplan. You’ve got to wear the big man down. We’ve got other matches where we can test our stand-up.”

Lashley’s blows from the top position, more of a nuisance to start, grew in intensity and reached their peak with winging punches to the side of Sapp’s head. The hulking 36-year-old, who outweighed the 255-pound Lashley by nearly 70 pounds, actually tapped out twice, seconds apart. The referee did not see the first submission but halted the action when Sapp (10-5-1) back-handed the mat and asked out of the fight for a second time.

The co-main event lasted little more than two minutes, and it did not go well for UFC veteran Pedro Rizzo.

After an early takedown and some brief, ineffective ground-and-pound from Rizzo (16-9), Gilbert Yvel retruned to his feet and unleashed a hellacious flurry of ill-intentioned strikes, including a looping left hook and glancing head kick that wobbled his foe. The Brazilian fell into the meat grinder on the ground after a failed shot. Yvel (36-13-1, 1 NC) -- the controversial Dutch striker who has been disqualified three times in his career -- landed several crushing blows to Rizzo’s jaw, the last two of which came after he was clearly unconscious, the referee standing by idly. The match was over 2:10 after it began.

Having delivered 31 of his 36 victories by knockout or technical knockout, Yvel will face Paul Buentello at Affliction “Trilogy” on Aug. 1. A frightening physical specimen, he has posted eight wins in his last nine appearances. 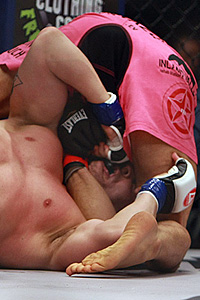 Kergosien pushed into the clinch and worked for a takedown in the opening seconds; it was a decision he would live to regret. Vazquez calmly drew him into a guillotine choke and locked it down in full guard. Kergosian (0-1) made a feeble attempt to free himself but wound up on the bottom, Vazquez’s grip tightening around his neck. The tapout followed 59 seconds into round one. Vazquez was visibly disappointed by Thomas’ inability to compete.

“I trained real hard for Din,” Vazquez said. “It’s unfortunate. It happened. Maybe we can make that fight happen down the road.”

A four-time U.S. Open Brazilian jiu-jitsu champion, Vazquez (13-2) -- who announced his retirement in 2007 after his second appearance for EliteXC -- put the 145-pound division on notice.

Not known for his ground skills, Horodecki notched the first submission victory of his career, as he cinched a rear-naked choke for the tapout against the former muay Thai world champion. Horodecki took down Sriyapai inside the first minute, secured back control with hooks in and waited for an opportunity to present itself. After several minutes on the ground, Sriyapai exposed his neck, and Horodecki finished it. The end came 4:02 into round one.

Horodecki (13-1), who had not competed in more than a year, posted his second straight win since his brutal technical knockout loss to Ryan Schultz in December 2007.

Elsewhere, Affliction frontman Tom Atencio weathered a harrowing start to his first appearance in the cage in more than four years and stopped Randy Hedderick by second-round technical knockout.

Hedderick (1-1) rocked Atencio with a pair of first-round right hands, but his inability to finish wound up biting him in the rear. The 25-year-old Gulf Port, Miss., resident allowed Atencio to regain his faculties and push the fight into a second round.

Atencio, 42, rose to the occasion in the second period, as he scored early with a beautiful leg sweep takedown. He brought Hedderick to the ground again late in the round and blasted away with punches from the top. Bleeding heavily from his nose, Hedderick did not come out for round three.

“Anybody that steps into this ring, I’ve got a lot of respect for,” Atencio (2-0) said. “Win, lose or draw, at least he had the balls to get in here.”

Finally, King of the Cage veteran Waachiim Spiritwolf stunned Brett Cooper, as he dropped him with a ringing right hook in the first round and finished him with strikes on the ground 3:41 into their match. Cooper (9-5) rose immediately to his feet after absorbing the beating and staggered around the cage, seemingly unaware that he had been short-circuited by Spiritwolf’s punches. The defeat snapped his six-fight winning streak.

“I said, if he didn’t take me serious, it was going to be a real short night for Brett Cooper,” Spiritwolf (6-4) said. “That’s what happened.”