Junior Boya was in the right place at the right time, and now he’s the new Jungle Fight interim flyweight champion.

When former interim titleholder Robson “New” dos Santos missed weight by nearly six pounds Friday and was summarily bounced from the organization by promoter Wallid Ismail, Boya got the call to face Marcus Vinicius “Cabecinha” Sa Freire in the main event of Jungle Fight 55. Despite the short notice and a long layoff, Boya looked more than ready when he stepped into the cage Saturday night at Botafogo Soccer and Rowing Club Gymnasium in Rio de Janeiro.

Sa Freire had trouble navigating Boya’s southpaw stance from the onset, as the late replacement repeatedly found a home for his left hand and turned caught kicks into takedowns. After lighting up Sa Freire with a flurry of punches at the end of round one, Boya came back to finish the job in the second frame. A pretty counter left cross sent Sa Freire to the floor, where Boya sealed the deal with rapid hammer-fists that forced referee Douglas Aires into action at the 86-second mark.

Boya had not competed since 2009; in fact, the 25-year-old Manaus native was effectively retired from MMA until last year, when an offer from a sponsor lured him to train at Rio’s Game Fight Academy.

In the co-main event, Caio Alencar advanced to the final round of the Jungle Fight 2013 heavyweight grand prix by punching out Edson “Conterraneo” Franca. 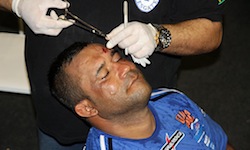 A. Oliveira
Edson Franca needed stitches courtesy of
Caio Alencar.
Alencar used range to his advantage in the opening round, peppering his stocky opponent with kicks and a knee which opened a deep gash between Franca’s eyes. Franca was unable to do much damage with his looping power punches, but it seemed the former bricklayer’s sturdy chin would carry him though the fight. Even after Alencar appeared to knock him unconscious with an illegal shot to the back of the head, Franca recovered and came back to fight. However, the Sao Paulo native’s time ran out at 3:41 of round two, when Alencar reopened Franca’s cut and referee Alessandro Souza intervened.

A pair of international lightweight matchups ended in a 1-1 draw between Brazil and Mexico. Ary Santos did the local crowd proud by submitting Marcos Reyes with a sneaky, inverted heel hook after 2:07, but Tijuana’s Fabian Quintanar evened it out for the visitors when he caught Ederson Moreira with a triangle choke at 3:14 of round two. 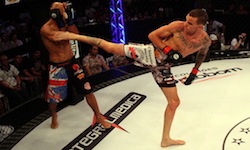 Constrictor Team bantamweight Renato “Moicano” Carneiro kept his unbeaten record intact with a lackluster decision win over Nilson Pereira “Feijao”. Using every bit of his 6-inch height advantage to stuff takedowns and maintain his range with kicks, Carneiro kept 5-foot-5 Pereira at bay or on the ground for the majority of the bout. When things truly fizzled in the final round, the fighters were issued two yellow cards each for inactivity, which resulted in three unusual 27-26 scorecards for Carneiro.

In preliminary action, veteran featherweight Fabiano “Jacarezinho” Silva overwhelmed a green Patrick Tavares with ground-and-pound to score a first-round knockout at 2:57, while flyweight Sidney “Junior Abedi” Oliveira opened the card by stopping Pericles Sampaio with punches from rear-mount at 2:01 of round two.