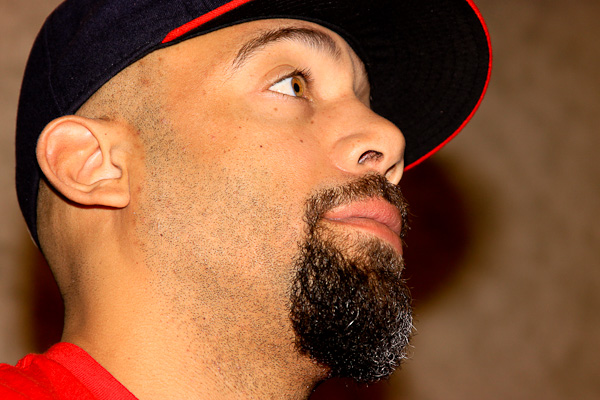 Late in the first round of their heavyweight bout Saturday at UFC on Fox 3, Lavar Johnson backed Pat Barry up against the cage and teed off.

Barry managed to block some of the knees and punches coming at him, but too many got through and eventually he dropped, forcing referee Dan Miragliotta to stop the contest at 4:38.

“Once you’re up against the cage and you’re not firing back, then I can just pick my shots,” Johnson told the Sherdog Radio Network’s “Savage Dog Show.” “He’d block a couple of them, but the MMA gloves are so small, they’re going to sneak in eventually. There’s only so much you can take. I was just surprised that he didn’t try to shoot or grab me or anything. He just froze up, I guess.”

The fight began with both men headhunting. Barry changed it up, though, when he put Johnson on his back.

“That’s what we thought he was going to do,” Johnson said. “I didn’t expect him to come out and bang as quickly as he did. He’s been working a lot on his ground game. I was just surprised he took me down that easy.”

More surprises came on the ground. Barry moved into the mount at one point, but he quickly gave up the position in favor of side control.

“I was tripping too,” said Johnson, who had expected Barry to punch and elbow from the top. “I was like, ‘Oh man, here it comes. I’m going to have to buck and use all this energy to get him off me.’ And he just helped me out, I guess.”

After moving into side control, though, Barry secured a keylock that made Johnson grimace. Clearly Barry knew that four of his opponent’s five losses have come via submission.

On the feet, Johnson delivered his second punishing finish in as many UFC bouts. He did see some room for improvement, though. Whomever he fights next, Johnson doesn’t want to be stuck underneath him, fending off submissions.

“I will be working on my ground game a lot more because that’s not cool,” Johnson said. “I’d like to get up a lot faster than what I did. I will be up at AKA with Cain [Velasquez] and all those guys a lot more for this [next] one, but anybody’s fine with me.”