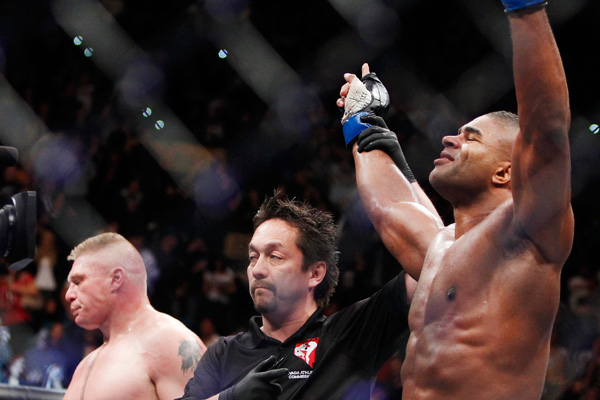 
Brock Lesnar took one too many shots to the body from Alistair Overeem.

Overeem (36-11, 1 NC, 1-0 UFC) softened Lesnar with knees to the gut and finished him with a brutal liver kick in the UFC 141 main event on Friday at the MGM Grand Garden Arena in Las Vegas, forcing the stoppage 2:26 into round one. Afterward, Lesnar -- who had roughly a foot of his colon removed in May following a second bout with diverticulitis -- announced his retirement from mixed martial arts.

“My hat is off to Alistair Overeem. I’ve had a really difficult couple of years with my disease,” Lesnar said. “I’m going to officially say that tonight is the last night you will see me in the Octagon.

“Brock Lesnar is officially retired,” he added. “I promised my wife and my kids if I won this fight that I would get a title shot and that would be my last one, but if I lost tonight ... everyone, you’ve been great.”

Lesnar (5-3, 4-3 UFC) attempted one single-leg takedown and was turned away by the hulking Dutchman, who showed no regard for the former World Wrestling Entertainment superstar’s skills. He walked through Lesnar’s punches, bullied his way into the clinch and fired off the knees for which he has become feared. Lesnar slowly wilted.

Unable to get the fight the ground, Lesnar ate one last kick to the abdomen and crumpled at the base of the cage. There, Overeem swarmed with punches until referee Mario Yamasaki intervened on the onetime UFC champion’s behalf.

“Today was all about bad intentions. First or second round -- I promised,” said Overeem, now the number one contender for Junior dos Santos’ UFC heavyweight crown. “Nice little K-1 body kick. I trained the takedown defense a lot. Brock is an excellent wrestler, so I had to step up my game.”

Cerrone No Match for Diaz

“The Ultimate Fighter” Season 5 winner Nate Diaz staked his claim as a contender in the lightweight division, as he overwhelmed Donald Cerrone with sharp, accurate punches to the head and body en route to a unanimous decision in the co-main event.

“I trained hard. I have really good training partners,” Diaz said. “I’ll have to sit back and watch [the tape]. I got poked in the eye a couple of times [by his] fist, so I hope I didn’t look too sloppy. I’m glad I got the win.”

Diaz blasted through Cerrone’s defenses with a blistering multi-punch combination inside the first minute of the fight, and “Cowboy” was never the same. Diaz landed repeatedly to the head and body throughout the one-sided 15-minute encounter, refusing to allow his opponent a moment’s rest. Cerrone, bleeding heavily from the mouth and nose, turned to his kicks in the second round, and while effective in short bursts, he never gained a foothold in the match from an offensive perspective.

The scene replayed itself over and over again. Outside of the occasional leg sweep, knee to the body and head kick, Cerrone (17-4, 1 NC, 4-1 UFC) looked nothing like the man who had won four fights in the previous 10 months. He simply had no answer for Diaz, a 26-year-old Stockton, Calif., native who will carry a two-fight winning streak into his next appearance.

“I got head butted by my horse and it split my lip,” Cerrone said, “but this guy ... I guess you’ve got to be from Stockton to be tough. All the s--- I was talking, he brought it. I promise I’ll fight my ass off every time, as best as I can give y’all.” 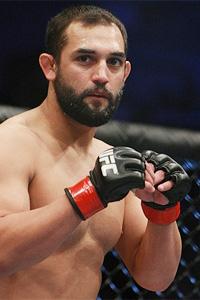 A beautiful left hook from Johny Hendricks laid waste to former welterweight title contender Jon Fitch in a featured matchup at 170 pounds. It was over 12 seconds after it began.

Fitch (23-4-1, 1 NC, 13-2-1 UFC) -- who had not been finished in more than nine years and had lost only once in his previous 23 appearances -- threw a straight right hand, backed away and ate the punch that ended his night. The left hook found its mark, and Fitch collapsed. Hendricks (12-1, 7-1 UFC) moved in and fired off one more left hand for good measure, as referee Steve Mazzagatti stepped in to prevent Fitch from absorbing further punishment.

“What did I tell everybody? In every interview I did, I said that I had a left hand,” said Hendricks, a two-time NCAA wrestling champion at Oklahoma State University. “Everybody has been counting me out. I knew if I hit him with it, I could lay him out.”

Matyushenko (26-6, 7-4 UFC), faced with a length and speed deficit, was tentative from the start. Gustafsson blasted him off his feet, as he caught the Belarusian moving forward and clipped him with a stout left jab. Matyushenko went down and covered up in an attempt to defend himself. Gustafsson (13-1, 5-1 UFC) would not be denied, as he let loose with hammerfists and punches for the finish.

“I was prepared for three hard rounds,” said Gustafsson, who has rattled off four consecutive victories since his submission loss to current Alliance MMA teammate Phil Davis in April 2010. “Vladimir is a tough guy. I look up to him. He’s a really good fighter, and he’s been here a long time. It was my day today. I got the biggest win of my life.”

The undefeated Jim Hettes went the distance for the first time, but he was no less dominant in doing so. The 24-year-old prospect wrecked “The Ultimate Fighter” Season 12 semifinalist Nam Phan in the clinch, struck for repeated trip takedowns, unleashed with brutal ground-and-pound and attacked with various submission attempts en route to a lopsided unanimous decision.

Hettes roared out of the gates and put together as lopsided a first round as one could imagine. He did everything under the sun from an offensive standpoint and appeared close to putting away Phan with punches and elbows from top position. By the time the first five minutes were over, a dazed Phan retreated to his corner, blood streaming from his left eye courtesy of a well-placed elbow.

Not much changed in rounds two and three, as Hettes continued to punish his featherweight foe. He closed with a flurry in the third, where he moved to mount and threatened Phan (17-10, 1-3 UFC) with an arm-triangle choke before abandoning the hold in favor of more punches and elbows. It was a complete performance.