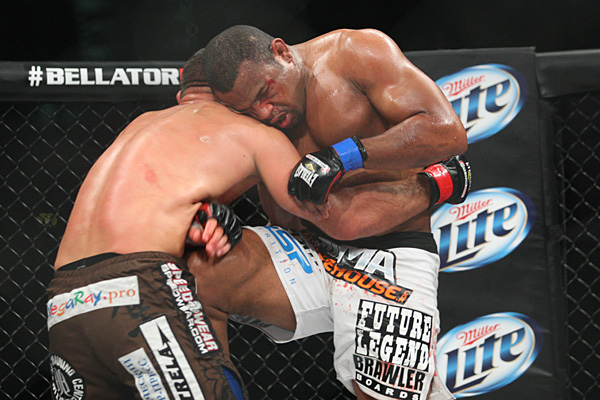 
There was nothing spectacular about Emanuel Newton’s performance, but it got the job done.

Takedowns, a string of looping overhand rights and a timely third-round knockdown spurred Newton to a unanimous decision over Mikhail Zayats in the Bellator MMA Season 8 light heavyweight tournament final at Bellator 94 on Thursday at the USF Sun Dome in Tampa, Fla. Newton (21-7-1, 4-1 Bellator) swept the scorecards by matching 29-28 marks.

The victory propels Newton into a future title fight against reigning Bellator light heavyweight champion Attila Vegh -- the only man to defeat him in his last 10 starts.

Newton secured a pair of takedowns and scored with ground-and-pound in the first round and dropped Zayats (21-7, 2-1 Bellator) to a seated position with a searing right cross in the third. The Russian did his best work in round two, where he shut down Newton’s standup, tagged the former Maximum Fighting Championship titleholder with straight punches and delivered a last-second takedown.

Zayats’ momentum was short-lived, however, his tournament run ending one step shy of his intended goal. The defeat halted his seven-fight winning streak. “It feels amazing, man,” Rickels said. “I really wanted to put an exclamation mark on the way I went out of this tournament, and I knew [beating] Saad would be the way to do that.”

Awad (14-5, 2-1 Bellator) controlled much of the fight with takedowns, ground-and-pound and a stifling top game. However, as the second round neared its conclusion, Rickels (14-1, 8-1 Bellator) drew him into a wild exchange, clipped him with a left hook and then leveled him with a right mere moments before the bell sounded. Waugh assessed Awad and declared the match over. The Californian protested almost immediately.

“I knew he was going to trade with me,” Rickels said.

“We ended up doing a little bit of wrestling, but that exchange in the corner -- that is what I wanted. I got to land that right hand, and I guess I do have some power.”

The victory earns Rickels a $100,000 paycheck and a shot at Bellator’s 155-pound title, currently held by the unbeaten Michael Chandler.

“I know that [with me] fighting Chandler, [fans] are going to see a whole lot of [exchanges], except I think we’re going to be landing on each other’s chins,” Rickels said. “He said a little something about how I was lacking power. I don’t know. I think I’ve got a little bit still.” Takedowns and heavy ground-and-pound softened Houston for the finish. Melo (29-11-3, 1-0 Bellator) struck for takedowns in all three rounds, battering his opponent with everything from hammerfists and elbows to body kicks and standing-to-ground punches.

Houston saw his best chance at victory come and go in the second round, where he swept the Brazilian off his feet with a clubbing right hand and threatened him with a rear-naked choke. However, he failed to secure his hooks, allowing Melo to free himself from danger.

The 32-year-old Brazilian delivered another takedown 30 seconds into the third round and transitioned to a mounted arm-triangle choke for the finish. The win, Melo’s sixth in a row, grants the Jungle Fight veteran entry into Bellator’s next eight-man welterweight tournament. A Team Nogueira export, the 21-year-old Lima dropped Mann (21-6-1, 3-3 Bellator) to his knees with a tight left hook in the first round, put his polished ground game on display in the third and countered effectively throughout the 15-minute match.

Mann, a former featherweight, was beaten to the punch repeatedly.