John Lineker stole the show and the bantamweight GP at Nitrix 6. | Marcelo Alonso/Sherdog


BRUSQUE, Brazil -- Saturday night in the southern Brazilian city of Brusque, it was a little-known underdog that conquered Nitrix Fight's bantamweight tournament: his name is John Lineker.

Southern Brazil's top promotion returned with its sixth major installment at the Brusque Multiuse Arena. Before a crowd of nearly 2000 locals, Lineker emerged as one of the country's top young 135-pounders, smashing both Alessandro "Lenhador" Cordeiro and Diego D'Avila to take the four-man, one-night tournament featuring the region's top bantamweights. 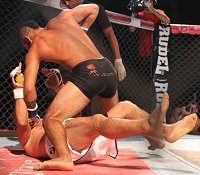 The 20-year-old Lineker, a product of the Emporium team in the port city of Paranagua, got off to a fast start on the night with an impressive knockout of Cordeiro. Despite being a training partner of one of the country's best kickboxers Vitor Miranda, "Lenhador" couldn't match Lineker in the striking department, as he was dropped badly in the first round. Lineker, aptly nicknamed "Hands of Stone," followed up with five brutal shots that knocked his foe unconscious at 3:44 of the opening frame, and clearing his path to the finals.

On the other side of the tournament, upset reigned.

It was expected that the tournament finals would be a rematch between Lineker and the highly-touted Rafael Silva, with "Morcego" having previously defeated Lineker by unanimous decision in December 2009. However, despite being considered the heavy tournament favorite, Silva was shocked in his opening bout against Diego D'Avila, a tough Manaus native who has spent the last year training out of Cristiano Marcello's CM System. 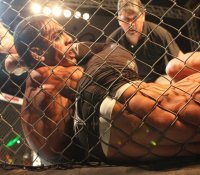 M. Alonso
D'Avila upset the favored Silva.
With superior stand-up and takedowns, "Morcego" was giving D'Avila all he could handle early on. However, as Silva, a training partner of Thiago Tavares, punished D'Avila from guard, he was surprised by a sudden armbar attempt from his battered foe. At 4:33 of the first round, "Morcego" was forced to tap, and D'Avila triumphed.

In the final, however, there was no comparison. Lineker avoided all of the takedown attempts from the less experienced D'Avila, and punished him badly on the feet. Lineker won each round in one-sided fashion, sprawling and brawling en route to a unanimous decision and the Nitrix bantamweight crown.

With six wins in 2010, the young Lineker has now won eight straight bouts. Even with the upset outcome, locals will surely crave a Lineker-"Morcego" rematch even more in the coming months. 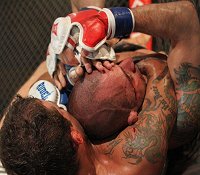 M. Alonso
Cristiano Marcello dominated early.
Supported by his local fanbase, Marcello dominated the first two periods. After gaining an advantage in the punching exchanges, the Brazilian took his opponent down, mounted him, took his back, and almost finished the fight with a rear-naked choke. The second round was more competitive for the Spaniard, but Marcello was still able to land on the feet and on the floor to earn the round.

However, in the third round, the British-based Spaniard -- a teammate of Terry Etim, Paul Sass, Paul Kelly and others at Team Kaobon -- took total control of the stand-up. A tired Marcello simply moved away, as the cheers turned to boos.

"People in Brazil like to say I always get easy fights. There are no easy fights anymore," Marcello said after the buot. "The French guy I faced in Jordan was really tough and Oriol was also very tough. It was definitely not easy to win this belt and I'll train even harder to keep it at CM System." 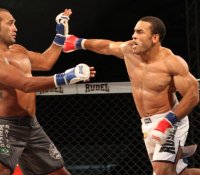 More even was the 185-pound challenge between the most popular local fighter, Gilberto Galvao and tough vet Marcelo Brito. Galvao and Brito exchanged punches and takedowns over three rounds, with "Giba" better in the first, and Brito evening the score in the second round.

While the third and final round was even and competitive, Brito looked exhausted, and a late salvo from Galvao was enough to earn the unanimous decision, 29-28 across the board.

Another Catarinense middleweight, Ivan "Batman" Jorge, got back on the winning side with a first-round anaconda choke of previously unbeaten Belem native Marcio "Jacarezinho" Castanheira, earning the tap at 4:32 of the first round.

In welterweight action, Mauricio "Shogun" Rua training partner Marcio "Gracinha" Cesar easily took down late replacement Elder Lara and submitted him with a kimura, earning the tap at 3:24 of the first round, while Chute Boxe's Leonardo "Macarrao" Mafra punched out Geverson Bergamo at 3:53 of the first round.