BALNEARIO CAMBORIU, Brazil -- The beautiful resort city of Balneario Camboriu is known for its beaches and cable cars, but Saturday night at the Sergio Lorenzato Gymnasium, it was home to the first edition of Centurion MMA. Local idols had the venue vibrating with great fights and important victories.

The true highlight of the evening belonged to Balneario native Franklin Jensen, who took on Ricardo Silva in the welterweight main event. Considered one of the great prospects from Santa Catarina -- the state that UFC lightweight Thiago Tavares helped put on the map -- Jensen dominated his foe with great takedowns and excellent ground work.

In the second round, Jensen, 33, mounted Silva and unleashed a powerful series of punches to force Silva to roll, giving up his back. From there, Jensen capitalized and sank in the rear-naked choke for the tap.

A Brazilian jiu-jitsu black belt, Jensen has recently bolstered his training in Rio de Janeiro under Marcio "Cromado" Barbosa with Brazil’s top luta livre team, Renovacao Fight Team. However, Jensen was not the only standout from Renovacao on the evening. 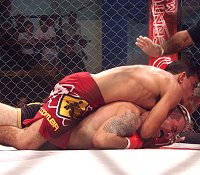 G. Venga
Jose Maria Tome is emerging as one
of Brazil's best flyweights.
Verginelli had his way with Roberto "Cigano" both standing and on the ground. Thoroughly having undermined his opponent, Verginelli forced Cigano to quit due to fatigue in the second round. The win was Verginelli’s sixth in his last seven bouts, his lone loss coming to unbeaten top prospect Bruno "Carioca" Santos.

Meanwhile, Tome showed himself to be a great bet at flyweight with his presentation against Anderson Cruz. “No Chance” easily took his opponent down, working various positions on the ground and landing hard blows on Cruz. Eventually, Tome secured the back and worked the rear-naked choke to perfection to get the first-round victory. The win moved Tome’s record to 24-2 with two no-contests, solidifying him as one of the country’s top flyweight talents.

Two other athletes who thrilled the crowd were Rafael "Morcego" Silva and Kaue Dudus.

The 25-year-old “Morcego” faced Erikson Lima in a bantamweight bout and showed his dominance by conquering various positions on the ground. Eventually, Silva locked up a rear-naked choke to put Lima away in the first round. 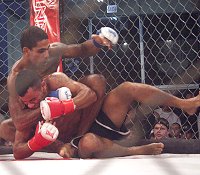 G. Venga
Rafael 'Morcego' won his seventh in a
row against Erikson Lima .
Meanwhile, the middleweight Dudus put in more work against the irreverent Dimitri Burgo, who tried to throw Dudus off his game with taunting throughout the fight. However, Dudus maintained his concentration and dominated the match on the floor, foot-locking his foe in the second round.

Fabio Amorim forced Elder Lara to submit to a punching assault in the second round of their welterweight contest.

Upstart Claudinei Maia submitted Edmilson Souza with a rear-naked choke in the second round.

Tough-luck local Alexandre Andreotti got a much-needed win over Daniel Freitas, punching him out in the second round.

In the opening bout of the evening, Wagner "Mexicano" armbarred Marcelo Adur in the first round.