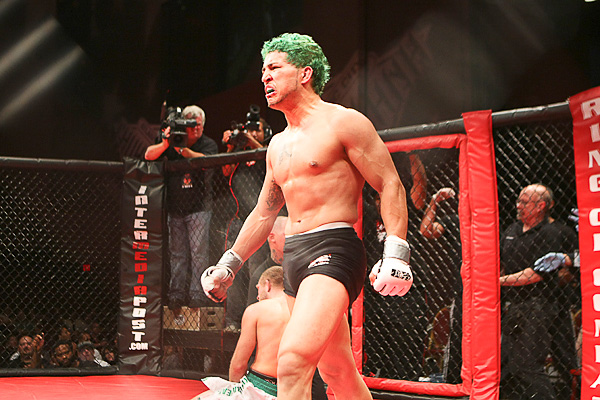 After choking out John Lineker on May 5 at UFC on Fox 3, Louis Gaudinot would like to fight one of the participants in the UFC’s four-man flyweight tournament.

Yasuhiro Urushitani has already been eliminated from the field, having lost to Joseph Benavidez in March. In addition to Benavidez, though, both Demetrious Johnson and Ian McCall are still in the tournament and they’re set for a rematch in June.

Regardless, Gaudinot will be back in training soon and getting ready for his next fight. In an interview with the Sherdog Radio Network’s “Beatdown” show, the 27-year-old discussed his win over Lineker, his green hair and more.

On Lineker asking to take a picture with him: “I kind of got the sense he was just happy to be there. He was smiling the whole time. He was really respectful, with good sportsmanship, but when we first got to the Izod Center, they let a bunch of the fighters go out to the cage and bounce around and do all that stuff, and he came up to me with his coach and he wanted to take a picture of me and my coach. Me and my coach kind of looked at each other like, ‘All right, this is a little awkward.’ But then he was all smiles. I don’t know. He was a little weird, but at the same time, I think he was just happy to be in the UFC and he was excited about being on the show.”

On jumping to the guillotine choke that ended the fight: “In the first round I was actually thinking about doing it also. I had him on the ground and then he stood up and I think there was a little bit less than 10 seconds left in the round. I knew that if I jumped it and he didn’t tap, he would have time to kind of make it to the end of the bell. So I saved it in the first round, and then in the second round, I kind of looked up and I saw that there was like 30 seconds left as we were starting to get up off the cage. I was just waiting for him to stand up so I could jump just because I knew I had enough time, and once I got my arm under his chin, he was either going to have to tap or he was going to sleep.”

On why he traded with Lineker on the feet: “I also thought that I was better on the feet than him going into the fight. He likes to swing. He likes to bang, but a lot of his shots are big and looping. I watched the fight over again a couple of times and I landed a lot of good punches clean to his jaw. I thought I was doing good in the standup. The reason I stayed standing up for most of the fight wasn’t because I was trying to get the Fight of the Night bonus but because I thought I could exploit that he does have wild, looping punches and I would be able to get to his chin before he got to mine.”

On whether his long hair was a hindrance: “I think it was a little bit annoying, but there’s times when I’m training and my hair gets in my face, so I’m a little bit used to it. In between rounds one and two, I was kind of arguing with my coaches a little bit because they were arguing to fix my hair and I was like, ‘Leave it. Don’t worry about it.’ They kind of told me to shut up a little bit and they just threw it back up. But we’ll see what happens. I’ll probably end up cutting it. I haven’t cut my hair in two years. I think it’s about time.”

On why his hair is green: “I’ve had green since my first amateur fight. It’s kind of become like my marketing thing. Everybody sees it and everybody recognizes me by my green hair, so I’m just going to stick with it.”

On what’s next: “My hands are a little sore, a little swollen. I’m going to get X-rays just to make sure. … I expect to be back training 100 percent in maybe a week or two. Once I get the X-rays done, I’m going to be cleared so I can fight again and talk to the UFC. I want to fight again in another three, four months. I don’t want to take a long break. I want to get right back in there. I’m trying to fight the guys that are ranked ahead of me so they can move me up in the rankings and get me closer to fighting for that title shot. I’m not asking the UFC for anything, but whoever they give me, I’ll fight. I would love to fight maybe one of the guys that was in the tournament just to show the UFC and the fans and everybody that I belong in the top five at flyweight in the world.”

Listen to the full interview (beginning at 22:10).