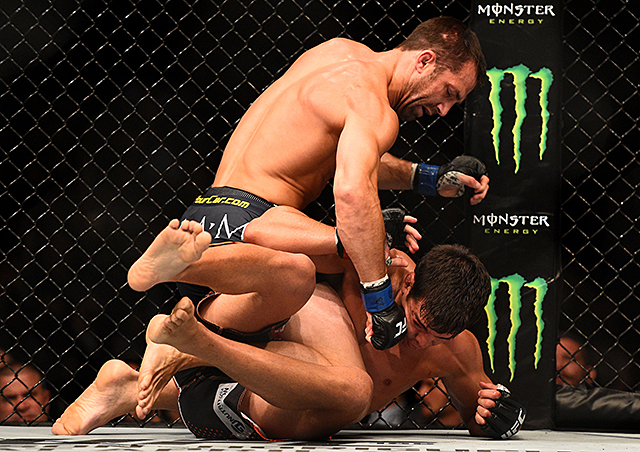 
Luke Rockhold did more than slay “The Dragon.” He destroyed him.

Rockhold staked his claim as the No. 1 contender in the Ultimate Fighting Championship middleweight division with a virtuoso performance, as he submitted Lyoto Machida with a second-round rear-naked choke in the UFC on Fox 15 “Rockhold vs. Machida” headliner on Saturday at the Prudential Center in Newark, N.J. Machida (22-6, 14-6 UFC) feebly tapped out 2:31 into round two, having been brutally beaten by a superior opponent.

The 30-year-old Rockhold drove the off-balance Brazilian to the mat with a glancing right hand in the first round, bailed on a topside guillotine and then uncorked vicious ground-and-pound. Machida soon found himself in a hopeless state, with Rockhold on his back exacting heavy damage from which he would not recover. A concussive elbow in the closing seconds of the frame sent Machida back to his corner barely able to stand under his own power. He had nothing left to offer at the start of round two. There, Rockhold again bullied him to the canvas, softened him with strikes and then moved to his back to lock in the choke for the submission.

A short-notice replacement for the injured Yoel Romero, Camozzi (20-10, 6-7 UFC) never stood a chance. “Jacare” backed up “The Ultimate Fighter” Season 11 graduate with punches, snatched a double-leg takedown and drew Camozzi into an impossible situation on the ground. Souza calmly freed his arms, slid to side control with help from the cage and took the armbar for the verbal tapout.


Max Holloway announced his arrival as a serious contender at 145 pounds, as he submitted Cub Swanson with a third-round guillotine choke in a featured featherweight clash. Swanson (21-7, 6-3 UFC) reluctantly surrendered 3:58 into round three, losing for the second time in as many appearances.

Holloway (13-3, 9-3 UFC) was utterly spectacular. The 23-year-old Hawaiian gave Swanson pause with accurate punches from the orthodox and southpaw stance, as he set the tone in the first five minutes. Swanson’s situation did not improve as the bout progressed. Holloway showed off the entirety of his offensive repertoire, keyed by stellar footwork. Swanson looked bewildered.

With two rounds in the bank, Holloway refused to take his foot off the gas and instead pressed the issue. He had Swanson reeling with a series of body blows in round three, and though the Jackson-Wink MMA mainstay weathered the assault, it only served to prolong the result. Later in the frame, Holloway drove Swanson to the mat under the threat of a standing guillotine, climbed to mount with the choke still in place and finished it there.

Holloway has won six fights in a row, five of them finishes.


Team Alpha Male’s Paige VanZant broke down Felice Herrig with a crushing pace, as she cruised to a unanimous decision in a women’s strawweight showcase. All three cageside judges sided with VanZant (5-1, 2-0 UFC): 30-27, 30-26 and 30-26.

Herrig (10-6, 1-1 UFC) had her moments early. She threatened VanZant with a succession of opening-round submission attempts, first with a rear-naked choke, then with a triangle choke and finally with an armbar. VanZant escaped them all. Herrig’s gas tank failed her down the stretch, as her 21-year-old counterpart put a hyperactive top game to optimum use.

The third round was not competitive. VanZant executed a takedown inside the first minute and torched the Team Curran export with ground-and-pound. Her work netted her a 10-8 round on two scorecards and provided her with an exclamation point on the victory.