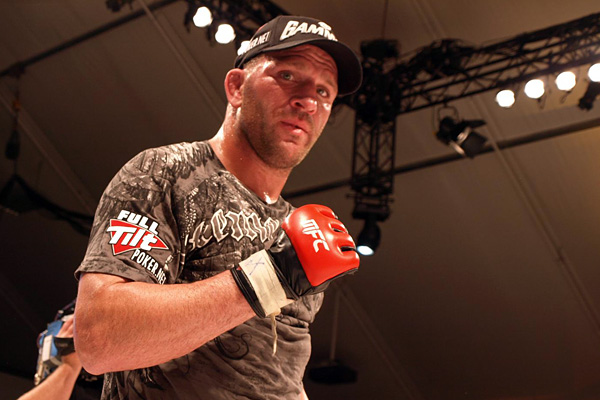 
ENOCH, Alberta -- Travis Lutter sent the MFC fans home unhappy as he defeated hometown star Jason MacDonald with a unanimous decision Saturday in the main event of MFC 22 “Payoff” at the River Cree Resort and Casino.

MacDonald, fighting in his home province for the first time in three years following a ten-fight stint in the UFC, could not find the solution on the ground fast enough to defeat the Fort Worth native.

Lutter, fighting for the first time in 18 months, took MacDonald to the ground quickly in the first and controlled the round on the mat. Lutter went from mount to back control and had MacDonald in danger with a rear-naked choke late in the first.

The second round was a carbon copy of the first, with Lutter establishing dominant position over MacDonald and once again nearly securing a choke from the back.

In the third round, MacDonald was able to establish his game plan by getting on top of Lutter. He managed to trap Lutter in the corner of the ring and land some blows, but it was too little, too late, as Lutter earned scores of 29-28 across the board.

“I definitely felt my Brazilian jiu-jitsu was the difference in the fight,” said the 36-year-old Lutter, who was the winner of “The Ultimate Fighter 4.” “When I was on top, I passed and when he was on top, he couldn’t.”

In the co-main event, Antonio McKee ground out a victory in typical fashion, as he soundly defeated Carlo Prater via unanimous decision with definitive wrestling. This fight had originally been scheduled as a five-round championship bout, but Prater missed weight by three pounds and the bout was demoted to a three-round, non-title affair.

After a brief feeling-out process, McKee took Prater down to the mat and began to land punches. The three rounds were carbon copies of each other, except for a minute in the third round where Prater managed to stuff one of McKee’s takedown attempts and sprawled nicely. Prater sustained multiple cuts around his right eye from McKee’s handiwork though.

“I really think I’m the best at 155 in the world. Who’s going to beat me?” asked the 39-year-old McKee. “(MFC owner) Mark Pavelich can try and find whoever to take my title, but I’ll just beat down their a-- as well.”

John Alessio landed a crushing blow to the jaw of Luigi Fioravanti 1:34 in the third round that would have won him knockout of the night in most events. Alessio, who took heavy shots from Fioravanti earlier on, landed flush with a right hook that dropped the American Top Team product backwards. From there, Alessio followed him down to the mat and landed hammerfists until the referee stepped in.

“I executed the game plan well,” said Alessio. “He landed more shots than I would have liked, but my game plan was to pick him apart, watch out for his big monster right hand, and use footwork to set up a counter, which is what happened. I knew it wasn’t going to be a ground fight.”

With his second victory in as many shows in the MFC, Alessio has emerged as the probable No. 1 contender for MFC welterweight champion Pat Healy.

Mike Nickels and David Heath battled toe-to-toe for 14 minutes in a fight that is sure to receive some support for “fight of the year” come December. The two UFC vets landed bomb after bomb with neither man blinking. The first round was a feeling-out process, but the action picked up shortly in a very big way.

In he second round, both stayed in the pocket throwing haymakers, hoping to connect flush. Nickels seemed to be getting the better of the exchanges, while Heath dropped his mouthpiece on two occasions. 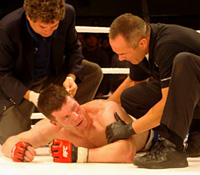 Rob King/Sherdog.com
Spratt knocked Gunn out cold.
The third round was more of the same, with both exhausted fighters winging rights and lefts with bad intentions. At one point, Heath lowered his hands and allowed Nickels to land nine consecutive cleans blows to the chin, which Heath responded to with a smile.

Heath’s mouthpiece came out a third time and the referee was forced to deduct a point. It was a moot point, as Nickels got the fight to the ground and secured a rear-naked choke at 4:02 of the third round.

Ryan Jimmo took a somewhat controversial split decision over Marvin Eastman in a fight that was spent mostly in the clinch with neither guy landing any huge blows. When the fight did go to the ground for short periods of time, it was Eastman who controlled position. However, Jimmo earned 29-28 scores on two of the judges’ cards, while the third gave Eastman the 29-28 nod. Sherdog.com scored the bout 29-28 for Eastman.

In a welterweight bout, Pete Spratt took out rising prospect Nathan Gunn with a brutal knockout 4:19 into the second round. After weathering a fine first-round performance by Gunn, Spratt turned it on in the second. Late in the round, Spratt threw a right uppercut that broke through Gunn’s defenses and sent him crashing face-first into the canvas.