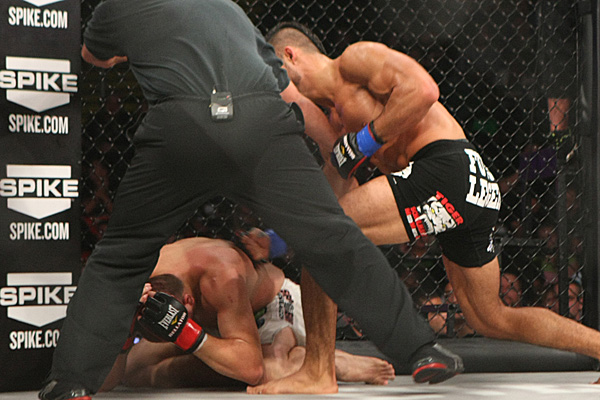 Good wiped out Tsarev with a volley of second-round punches in the Bellator Fighting Championships Season 7 welterweight tournament semifinals at Bellator 78 on Friday at the Nutter Center in Dayton, Ohio. The first man to hold the promotion’s 170-pound title, Good (14-2, 7-2 Bellator) finished it 3:54 into round two.

“I just went in there and did my thing,” Good said. “I’m ready to go out there and represent my team [in the final]. I’m ready for whoever comes my way.”

A Team Tiger Schulmann representative, Good took down his Russian adversary inside the first 10 seconds, passed the Tsarev (24-3, 13-3 Bellator) guard with ease and eventually transitioned to full mount. Round two did not go much better for Tsarev. Good dropped him with a left hand and moved in for the finish, even as Tsarev shied away and claimed he had been poked in the eye. Good swarmed, forcing referee Greg Franklin to intervene. 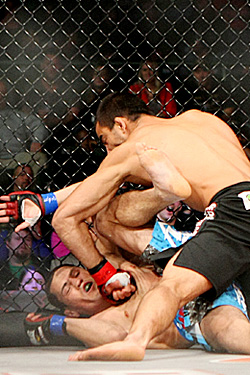 Hand speed was the key difference between the two semifinalists. Koreshkov (12-0, 4-0 Bellator) floored his Lithuanian opponent with a left hook to the temple, followed him to the mat and, with referee Jerry Poe looking on, unleashed a hellacious barrage of unanswered punches, many of them delivered after Zaromskis was clearly done.

“I’m very happy that I didn’t disappoint anybody,” the 22-year-old Koreshkov said through his translator. “I have so many emotions right now.” 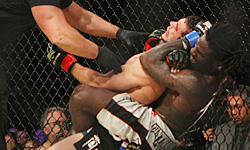 K. Mills
Straus submitted "Kid" Robinson.
Awaiting a featherweight title fight against either Pat Curran or Patricio Freire, Straus (21-4, 6-1 Bellator) left nothing to chance. He struck for multiple takedowns, outscrambled Robinson and slowly imposed his will. In the second round, he grounded Robinson repeatedly and softened him with punches and elbows before moving to his back. From there, he secured the choke for the finish. 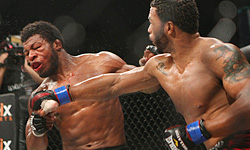 K. Mills
Rogers clearly busted up Steele.
“The Predator” staggered Steele with a searing right cross inside the first minute, providing a glimpse of what was to come.

The scene repeated itself over and over again, as Rogers fought at a measured pace, bullied Steele out of attempted clinches and limited his opponent to one-strike-at-a-time offense.

With two rounds in the bank, Rogers put a punctuation mark on the victory in the third.

There, he tagged Steele with a pair of right hands and then swarmed on his fellow Ohioan with reckless abandon. Multiple punches landed, the volley knocking Steele’s mouthpiece free and resulting in his bleeding heavily from the mouth and nose.


Bellator women’s 115-pound champion Zoila Frausto Gurgel made a triumphant return to the cage following reconstructive knee surgery, as she captured a unanimous decision from Casey Noland. All three cageside judges scored it the same: 29-28 for Gurgel (12-1, 6-0 Bellator), who competed for the first time since March 2011. 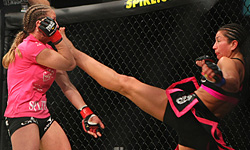 Noland (4-3, 0-2 Bellator) did some nice work in the clinch, as she attacked the champion’s body, legs and head with a series of knee strikes. However, none of them did enough damage to dissuade Gurgel. The 28-year-old Californian grew stronger as the fight went deeper. She nearly finished Noland with a kimura in the second round and opened a cut with a crisp, short elbow from top position in the third. Gurgel has recorded seven consecutive wins, five of them by decision. 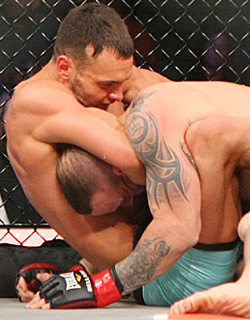 K. Mills
Butcher forced Asher to tap out.
In preliminary action, Brazilian jiu-jitsu brown belt Jason Butcher coaxed a tapout from Shaun Asher with a guillotine choke 92 seconds into their matchup at 185 pounds; regional standout Billy Horne submitted previously undefeated Strikeforce veteran Trey Houston with a rear-naked choke 3:30 into round one of their middleweight encounter; Mikkel Parlo, an unbeaten 22-year-old Danish prospect, stopped Jared Combs on punches 3:51 into the first round of their middleweight bout; Robert Hanna IV kept his perfect professional record intact with a split decision (29-28, 28-29, 29-28) over Rocky Edwards at 155 pounds; and Justin McNally rendered fellow MMA rookie Dave Blattman unconscious with a triangle choke 38 seconds into their 140-pound catchweight encounter.