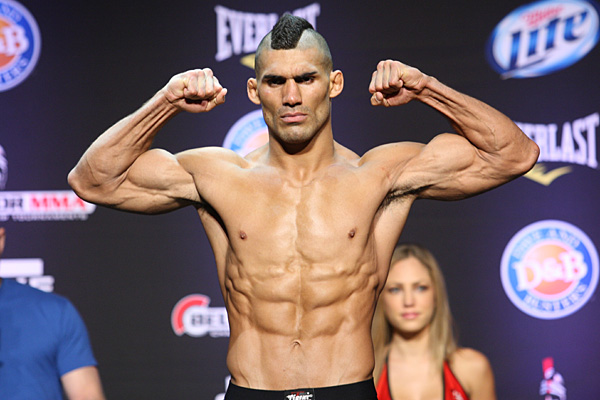 
MORRISTOWN, N.J. -- The “Cyborg” returned in a big and violent way.

Following an inauspicious showing on “The Ultimate Fighter 19,” Lyman Good returned to the cage Saturday night at Mennen Sports Arena in the main event of Cage Fury Fighting Championships 36. His adversary, “TUF 16” contestant and Pan-American jiu-jitsu champion Matt Secor, tried to bring the fight to the ground early after seizing control of Good’s back.

The plan never came to fruition, and Secor was made to pay by the former Bellator welterweight champ. Good broke free, and the subsequent scramble saw the Team Tiger Schulmann product connect with a big right hand that put Secor on the mat. Good pounced and landed several vicious elbows that forced referee Liam Kerrigan to stop the bout at 4:21 of the opening round, giving Good his first win in 14 months.

“To me, this fight was more than just winning. It was about making a statement,” Good told Sherdog.com after the bout. “I just went back to my old ways as being vicious and going out there and going for the kill. I used to fight like that. I’ve been more cautious. I’ve been throwing more technical parts of me into my fights lately. Now, I’m just getting back to a more old-school style of training and just going for the kill.”

After the bout, CFFC matchmaker Arias Garcia told Sherdog.com that Good lived up to the organization’s expectations coming into the bout.

“Before we signed Lyman, we thought he was going to be a contender for the CFFC welterweight title,” Garcia said. “He just let us know that for sure tonight.”

New York’s Darren Mima made possibly the loudest statement of the night in his flyweight bout against Bellator vet Claudio Ledesma. Mima started quickly and stayed away from needlessly dangerous ground battles with Ledesma, instead using his striking advantage to apply constant pressure to the Dominican. Coupled with his quickness, it was enough to earn Mima a big win over the more experienced fighter, with scores of 30-27, 30-27 and 29-28.

Following the bout, Sherdog.com learned that Mima is in line for a potential title shot against recently crowned CFFC flyweight champ Nick Honstein at a future event.

Aggression was the name of Kenny Foster’s game in his featherweight co-main event against another onetime “TUF” hopeful, season 12’s Andy Main. “The Tooth Fairy” blitzed from the opening bell, using right and left hands to bloody Main’s left eye. Main survived the opening onslaught to see round two, where Foster became more calculated and picked his shots as he moved in and out of the pocket against the taller Main. By the end of the round, Main had a sizable mouse built up beneath his left eye. After Main failed to mount any discernible offense in round three, Foster took the split decision with scores of 30-27, 29-28 and 27-30.

Big shots opened up the first and second rounds of a welterweight bout between Diego Peclat and Emmanuel Walo. Peclat landed the big blow in the first round, and Walo returned the favor at the start of round two. Both fighters made it to round three, where Walo bloodied Peclat and gained the advantage, earning Walo a split decision (29-28, 29-28, 28-29).

Justin Bonitatis took on Jake Anderson in a battle of lightweights making their pro debuts. Bonitatis used his wrestling to pressure Anderson from the opening bell. However, referee Kerrigan seemed to call a premature halt to the bout just as Anderson was scrambling back to his feet. The bout went in favor of Cherry Hill’s Bonitatis, officially a technical knockout due to punches at 3:40 of round one.

Diego Llamas had no answer for Corey Bleaken’s takedowns in their lightweight bout. AMA Fight Club’s Bleaken kept his opponent on his back until 2:03 into round two, when he forced Llamas to tap out to punches.

After coming up on the wrong end of a referee decision in his last bout, Shedrick Goodridge left nothing to chance in his bout with Eric Roncoroni. “Chocolate Thunder” scored the first submission of the evening, using his wrestling and pressure to secure a rear-naked choke at 4:39 of the opening round.

A flyweight bout between Sergio da Silva and Andrew Aguilar turned into a battle between da Silva’s takedowns and Aguilar’s work from his back. For as often as Aguilar was taken down, he remained very active over the course of the three rounds. Aguilar’s work was not enough though to earn him the win, as da Silva took the unanimous decision (30-27, 29-28, 29-28).

A light heavyweight bout between Tim Lutke and Donta Wade started with all sorts of promise for AMA Fight Club’s Lutke as he took down the “African Mantis” quickly. But, as the fight wore on, cardio became an issue for Lutke, and Wade started to mount more offense. An accidental foul forced referee Vitor Ribeiro to rule the bout no-contest at 3:00 of round two.

The evening opened with a doctor stoppage, as Noel Arcibal opened up a cut near the eye of “Rubber Band Man” Melvis Figueroa in their featherweight duel. The end came at 2:59 of round one.