The rematch with Noboru Tahara went similarly to their initial meeting, sans the low-kick walloping by Somdet. Tahara again devoted himself to taking the fight down where, ideally, the former Thai stadium veteran would be out of his element. Tahara got his takedowns -- three of them in the first frame -- but they worked only momentarily, as Somdet turned to his capable spider guard and kicked off Tahara in seconds. Somdet thus kept the fight standing, slamming one-twos and kicks at all levels on Tahara.

Tahara continued to try for takedowns in the second stanza. While he was successful initially, the effort wore on him as Somdet relentlessly popped to his feet. Tahara ate a fair amount of counters from Somdet between attempts, including flying knees and awkward overhand hammers in addition to punches and low kicks.

Even before the scorecards were read, Somdet jumped on referee Suzuki and hugged him in his ritual in-ring celebration. It was justified soon after, as judges Tadashi Yokoyama, Taro Wakabayashi and referee Toshiharu Suzuki ruled the bout unanimously for Somdet (30-27, 30-26, 30-26).

Fight of the Night honors go to Ryuichi Miki and Masaaki Sugawara, who treated fans with a blistering three rounds of standup in a rematch that saw Miki avenge his pro-debut loss to Sugawara. The brawler in Sugawara pushed forward to throw combinations and kicks at Miki. In response, Miki showed excellent blocking and footwork. He also returned solid right hands and high kicks that landed flush but did not faze Sugawara.

After losing a point for two unintentional low blows, Sugawara was forced to go for broke in the latter half of the third period. He threw all he had in pursuit of Miki, but it was too little too late as judges Suzuki, Watanabe and Wakabayashi ruled the bout for Miki (30-26, 29-28, 29-28).

2008 Shooto rookie MVP Issei Tamura neutralized Gustavo Falciroli's rubber guard to grind away on top and take a unanimous decision. Pulling guard to try to catch Tamura in a submission, Falciroli hadn't counted on the Japanese fighter stopping him from putting his left leg under the chin to set up the gogoplata. As Falciroli repeatedly tried this only on his left side, it made Tamura's job easier to pass to half guard and stay in close, smashing with short punches. Judges Yokoyama, Suzuki and Wakabayashi ruled the bout 30-28, 30-27 and 30-27 for Tamura.

In the most competitive of the evening's Pancrase versus Shooto bouts, current Pancrase 170-pound champion Takuya Wada notched the only Pancrase win of the evening, tapping out former Shooto 183-pound champion Shiko Yamashita. Both men split rounds one and two, taking turns in top position and dropping punches. Wada won out in the end, however, posturing up to drop punches from half guard that forced Yamashita to give up his back and the choke at 4:26 of the third.

Dream veteran Kotetsu Boku got into deep waters early against Yukio Sakaguchi, a Pancrasist who dropped him with a blistering charge in the opening moments. Boku ate a barrage of punches in the corner, and as he turned to cover up, the bout seemed all but over as Sakaguchi latched onto his back for a rear-naked choke. The choke looked sunk as referee Wakabayashi called the catch, but Boku survived and fought to his feet.

Then, as Boku backpedaled under a swarming Sakaguchi, he let loose with a tight left hook that blasted Sakaguchi's chin and sent him face first to the canvas. Still bewildered, Boku did not dive in to finish, but Sakaguchi was already out cold, prompting referee Wakabayashi to call the epic KO comeback at 1:54 of round one. 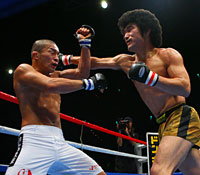 Daniel Herbertson/Sherdog.com
Yamaguchi (right) held on
to outpoint a game Shimizu.
Kiyotaka Shimizu proved surprisingly competitive against Shooto's resident afro owner Mamoru Yamaguchi. Shimizu took the fight to the Yoko Gushiken-themed fighter early, scoring crisp jabs and stinging hooks in between shooting for takedowns. However, Yamaguchi pancaked the takedown attempts and struck back with stiff one-twos and kicks and even scored three big flying knees to prompt judges Kanno and Suzuki to give him 30-27 and 29-28 cards, while judge Wakabayashi gave a dissenting 30-30 draw card for a majority decision.

Women's MMA dynamo Megumi Fujii took her flawless record to 19-0 by dispatching “Windy Tomomi” Sunaba by armbar in the evening's first Shooto versus Pancrase bout. Fujii got the inside trip early to drop punches from half guard and mount, forcing Sunaba to give up her back. Though Pancrase teammate Satoru Kitaoka shouted warnings to Sunaba that “the armbar's coming,” Sunaba couldn't stop Fujii from getting it anyway. “Mega Megu” dropped several punches and sat back into the submission for the tap at 3:24 of the first.

A patient Shuichiro Katsumura took his time to lock up the brabo choke and tap out former 132-pound contender So Tazawa at the 3:54 mark of the first round. Tazawa apparently tapped several times before referee Wakabayashi called a catch and then realized he was submitting. Having defeated the last man to face Shooto 132-pound champ Masakatsu Ueda, Katsumura made belt gestures at his waist, calling for the next title shot.

Aside from needing to work on low kick defense, Yoshihiro Koyama emerged largely unscathed from his encounter with EliteXC vet Tetsuji Kato. Koyama landed a crisp left hook in the second to drop Kato, who scrambled to recover while Koyama dropped a barrage of left hands on the floor to garner a stoppage from referee Suzuki at 1:22.

Daisuke Sugie triumphantly returned to Shooto, opening the show with a dominant unanimous decision over Paolo Milano. In both rounds, “Amazon” brought Milano to the canvas, worked a stifling top game, punched to the head and kneed to the body. He also dropped Milano on the back of his head to create openings to pass. Judges Kanno and Yokoyama ruled the fight 20-18, while referee Suzuki ruled it 20-17 for Sugie.