Lyoto Machida ended the brief title reign of light heavyweight champion Rashad Evans with power, patience and precision on Saturday in the featured bout at UFC 98.

The unbeaten Machida dominated the match from the start, as he delivered three knockdowns against the champion and finished him with a brutal left hook. The final blow left Evans unconscious against the cage at the MGM Grand Garden Arena in Las Vegas, as he brought a rousing conclusion to the first title bout between two undefeated fighters in UFC history.

With the exception of a brief second-round flurry, Evans (13-1-1) never moved close enough to land anything of consequence against the elusive Brazilian. He met his end 3:57 into round two.

“Karate is back,” Machida declared. “I tried all my life to be champion. I’m very, very, happy. Now, I want to keep this belt for a long time.”

For Evans, the first taste of defeat was a vicious one. The Jackson’s Mixed Martial Arts standout survived a first-round knockdown, when he regained his footing after eating a body kick and short left hand. He could not withstand the second.

“He was very difficult to solve, very fast and explosive,” Evans said after awakening from his slumber. “He did a good job tonight. He’s real clever, and he has excellent timing. I just didn’t come out sharp enough. The only thing I can do is go forward. It’s the first time being on the other side.”

Machida (15-0), a black belt in Brazilian jiu-jitsu and Shotokan karate, will likely face top contender and former champion Quinton “Rampage” Jackson sometime later this year, perhaps after the two coach against each other on season 10 of “The Ultimate Fighter.”

After more than a year’s worth of back and forth bravado, two-time welterweight champion Matt Hughes got the last laugh in his feud with Matt Serra, as he earned a unanimous decision in the co-main event. All three judges scored it 29-28.

Hughes (43-7) survived several harrowing minutes early after being struck by an inadvertent head butt and subsequent punch to the side of the head in the first round. The composed Serra followed up but failed to finish a noticeably wobbled Hughes, giving new life to the future hall of famer. 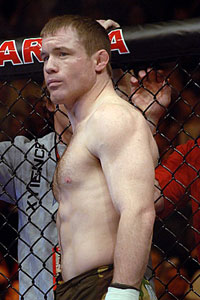 One of the sport’s most decorated fighters, Hughes took down Serra (9-6) in each of the last two rounds and fed his rival a steady diet of mild but effective ground-and-pound. Serra turned the tables on Hughes at the end of round three with a beautiful takedown, but with time winding down, he had little opportunity to capitalize.

“As a fighter, regardless of what I thought about him personally, I always kept him in high regard; he’s a hall of famer,” Serra said. “He’s got a good chin. He hung in there. I really wanted this win. I’m a positive person, so I take my hat off to him. I thought it was a fun fight. That’s what I’m here to do.”

Hughes, who tied Chuck Liddell for the most wins all-time inside the Octagon, appears intent on continuing his career despite rampant speculation that he might retire.

“I still go out there to compete because I love the competition,” Hughes said. “I’m a free agent now. I don’t have anything with the UFC. [UFC President] Dana [White] and I will have to go and talk about it. By no means does it mean I’d go anywhere else. I won’t fight for anybody else. I’d like to fight one more time in my home area there [in Illinois].”

Drew McFedries lived up to his moniker.

“The Massacre” made painfully quick work of Cage Rage veteran Xavier Foupa-Pokam, as he leveled the Frenchman with a wicked right hook and finished him off soon after. The end came just 37 second into the match, as referee Yves Lavigne stepped in on Foupa-Pokam’s behalf.

Winless in two UFC appearances, Foupa-Pokam (20-11) survived the initial onslaught from McFedries but found himself on his knees after eating a brutal uppercut. McFedries then sent him reeling into the cage with subsequent blows and finished him off with a straight left.

Based out of the Miletich Fighting Systems camp, McFedries (8-5) snapped a two-fight losing streak with the technical knockout. His last nine fights have ended inside one round.

A Brazilian jiu-jitsu brown belt, Miller threatened with a guillotine choke early in the opening round, but when the hold loosened and failed, Sonnen (23-10-1) took over the match. A decorated collegiate wrestler, he put Miller (11-2, 1 NC) on his back with ease and grinded away with relentless ground-and-pound and suffocating top control.

The 32-year-old Sonnen, a short-notice injury replacement for the world-ranked Yushin Okami, has rattled off eight wins in 10 bouts.

Frankie Edgar announced his arrival as a contender at 155 pounds, as he defeated former lightweight champion Sean Sherk by unanimous decision. All three judges scored it 30-27.

The 27-year-old Edgar (10-1) utilized superior movement and controlled most of the stand-up exchanges, as he kept the oncoming Sherk at bay. A former collegiate All-American wrestler, Edgar circled effectively and varied his strikes against the respected one-time titleholder. Sherk scored with a takedown in the third round, but his efforts were short-circuited when Edgar cinched an arm-in guillotine choke near the end of the round and closed in fine style.

Sherk (33-4-1) had won four of his previous five fights and 16 of his last 18 entering the matchup. The 35-year-old now must return to the drawing board in a division populated by younger, quicker competitors.