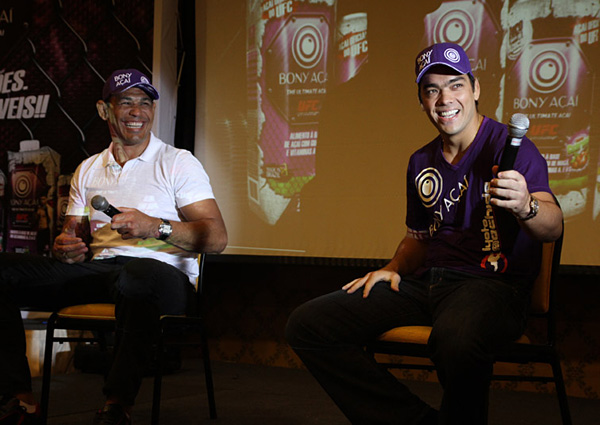 If Antonio Rodrigo Nogueira, Antonio Rogerio Nogueira and Lyoto Machida decide to stop fighting tomorrow, they already have a guaranteed safety net outside the world of combat: the motivational lecture circuit.

All three UFC veterans were on hand Friday to help promote the official launch of Bony Acai, a nutrient replenishment drink based in Brazil.

The ceremony was held in the luxury halls of the Hotel Windsor in Barra, Brazil, before an audience of more than 200 fans and sales professionals.

After a brief product presentation made by product founder Bony Monteiro, Machida, "Minotauro" and "Minotoro" entered the room and received a warm reception from those in attendance.

Machida had the floor first and began by sharing some important motivational lessons given during his childhood by his father, Yoshizo Machida. The fighter also had some fun with the fact that he is the only athlete whose likeness is identified with the product.

"I do not know if you know, but I practice urine therapy. Now, with this acai in supermarkets throughout Brazil, when you hear someone saying 'I have drank Lyoto,' it does not mean that someone drank my pee, but the taste from Para of Bony Acai," joked Machida, drawing laughter from the audience.

Up next was Minotauro, who was asked to compare a loss in the cage to an unsuccessful sale. The 41-fight veteran responded by referencing the difficulties that accompanied the recent operations on his hip and knee.

"I could not even walk for six months," he said. "If I thought only that my ultimate goal was to fight (at UFC 134), I would never have achieved it. But I set smaller goals, and each goal that was reached was like a victory.

"In the end, I not only fought in the UFC Rio (event), but I won by knockout. You have in selling a similar routine to us (as fighters). To receive a 'no' as an answer is (just) a portion of the path for you, but when we set goals and have the willpower, we can achieve those goals," he said.

"Six years ago he said that one day he would put his mark on the Octagon's biggest event in the world. Many thought he was crazy, but he ran after that and achieved his goals," Minotauro said. "Today the brand 'Bony' is not only inside the Octagon, but also in the head of the main champions of the sport."

A late-arriving Minotoro capped off the presentation by thanking Monteiro for his contributions to the sport.

"I'd like to thank Bony, who always believed in us long before the sport reached the level it has achieved. Now we have sponsors offering three times more than Bony to wear their cap, but we did not take the purple cap off our heads, because we are faithful and appreciate who supported us in difficult times."

After the lecture, the three fighters spent nearly two hours meeting the press and taking pictures with a huge line of fans.