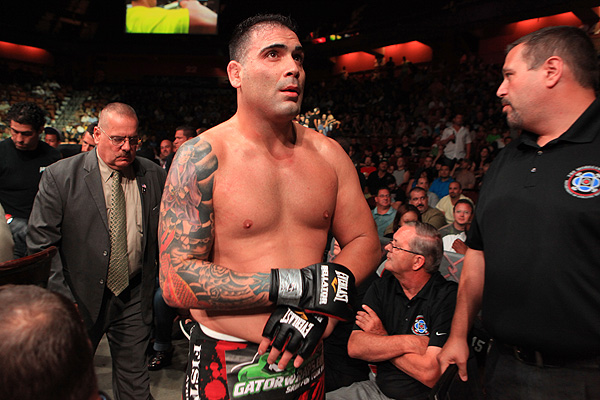 Though just a third of its 12 bouts were under MMA rules, MMA factored in prominently Friday at United Glory 15 inside the sparsely-filled Dynamo Sports Palace in Moscow.

The first 12 and a half minutes of the bout were marked by 34-year-old Rodriguez having his double-leg attempts easily pancaked and being stuck with left body kicks and right hands. The 25-year-old Magomedov’s attack increased with intensity as the bout wore on, with Rodriguez -- who clocked in at 248 pounds for the contest after a brief attempted run at light heavyweight -- bobbing, weaving and running at the end of the Russian’s combinations. By the two-minute mark of the bout, Rodriguez had already started to butt-scoot, and it permeated the bout.

Magomedov, who stepped in for UFC veteran Denis Stojnic on just four days’ notice, politely told Rodriguez to stand up each time, showing no particular exasperation with his opponent’s tactics. The ProFC heavyweight champion even seemed to apologize and high-five Rodriguez in the ring for every potential foul and what even seemed like legal body kicks at times.

The Staten Island, N.Y., native got the bout to the floor halfway through the third frame, but couldn’t cut through his foe’s guard. Rodriguez showed little to no desperation despite being obviously deep in a hole and needing a finish. It never materialized, and with the victory, Magomedov moved to 7-1 as a pro.

Rodriguez’s loss puts his career ledger at 48-17. The oft-troubled big man, who has battled weight fluctuations and also appeared on “Celebrity Rehab with Dr. Drew,” is now 1-6 in his last seven bouts. The last three have all come in Russia, including losses to Blagoi Ivanov and Alexander Volkov in December and February.

A teammate of Magomedov’s at Academy MMA in Moscow, welterweight Gasan Umalatov ran his mark to 12-1-1, dominating Ukraine’s Anatoly Safronov in less than two minutes.

Umalatov landed heavy left-handed leather on Safronov early in the contest, dinging his foe with most of what he threw. However, after cracking Safronov with another left hook, he opted to go for a submission in the ensuing scramble. His guillotine was a no-brainer and jumping guard only hastened the tap, which came at 1:50 of the first round.

A bowling ball of a light heavyweight, Sweden’s Ilir Latfi ran roughshod over underprepared Ukrainian Denis Bogdanov in just 51 seconds. An injury replacement for Vladimir Gerasimchik, Bogdanov was punched, slammed then punched again, all within the first 30 seconds of the bout. The 5-foot-8 Latifi then took mount and extracted an easy tap at just 51 seconds of the first round.

The evening's kickboxing portion featured an MMA flavor, as well, as Strikeforce heavyweight grand prix participant Sergei Kharitonov had no trouble in putting on larger gloves for his standup rules bout with American Mark Miller and getting an easy knockout victory.

The Russian overwhelmed “The Fight Shark” almost immediately, crushing him with heavy punches and putting him away with a potent right hook at just 1:59 of the first round. It was Kharitonov's first action of any kind since his submission loss to Josh Barnett in Strikeforce's heavyweight tournament semifinals last September. At United Glory 14 last May, Kharitonov knocked out notable K-1 brawler Mighty Mo, also in less than two minutes.