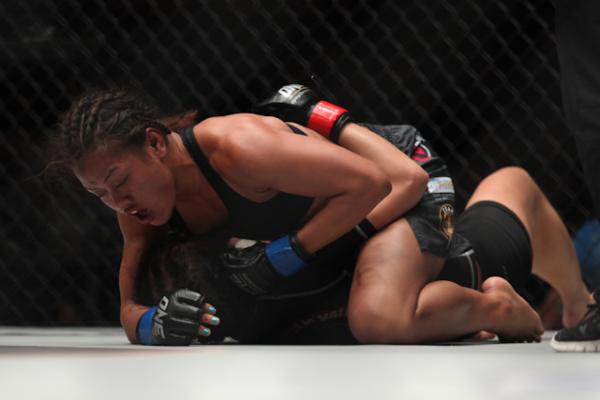 Ann Osman (top) wants to even the score at One FC 14. | Photo: Dean Marchand/Sherdog.com


One Fighting Championship plans to flesh out its female divisions in wake of a wildly successful clash between Malaysia’s Ann Osman and Singapore’s Sherilyn Lim in October. The women stole the show with a three-round, back-and-forth battle at a One FC event headlined by two of the promotion’s biggest stars: Shinya Aoki and Bibiano Fernandes.

Osman and Lim will meet in a rematch of their memorable scrap at One FC 14 “War of Nations” on Friday at Stadium Negara in Kuala Lumpur, Malaysia. The 27-year-old Osman remembers their first encounter well.

“I thought it was definitely a fairly close fight, with three intense rounds all the way through,” she said. “There were definitely a lot of grappling and clinching [exchanges] going on, and it was just unfortunate I lost by a 2-to-1 split decision. It was a learning curve for me, and both my coach and I have assessed my performance from the last fight. We both are working together to adjust and improve both my striking and ground techniques. I will be sure to come back better than my first fight, and this time, I won’t let it go to the judges’ decision.”

Osman was an active athlete in school. She participated in netball and basketball, as well as extracurricular sports like sea kayaking and white-water rafting -- activities she feels helped build her “competitive side.” Osman joined Borneo Tribal Squad a few years ago for fitness and fun. It soon turned into something much bigger, as she began training under A.J. “Pyro” Lias Mansor.

“Before I knew it, I was training with the Borneo Tribal Squad and competing in some amateur MMA and muay Thai competitions,” she said. “Ever since then, I have been training with A.J., who also is One FC’s Malaysian national featherweight champion. Through A.J., I have also had the opportunity to train with Will Chope and Mark Striegl, along with some great boxing, [Brazilian jiu-jitsu] and muay Thai coaches.”

Although MMA remains somewhat in its infancy in Malaysia, it has experienced rapid growth and national popularity, with Osman as one of the country’s rising stars.

“Malaysia is a cultural melting pot of many races and religions, especially in Sabah, where we have an open, accepting society,” she said. “Initially, my parents were worried that I would get hurt; however, after seeing how determined I was, eventually they gave me their full support. I am very fortunate to have the full support of my family, friends and fellow Malaysians.”

Outside of training and fighting, Osman has a full-time corporate career with Sabah & Sarawak, working as a business development manager in the property industry.

“I have to balance my training morning, noon and night around my work,” she said. “It’s definitely a full schedule, but I love it and hope to inspire others that, with hard work and passion, you can do anything you set your mind to.”