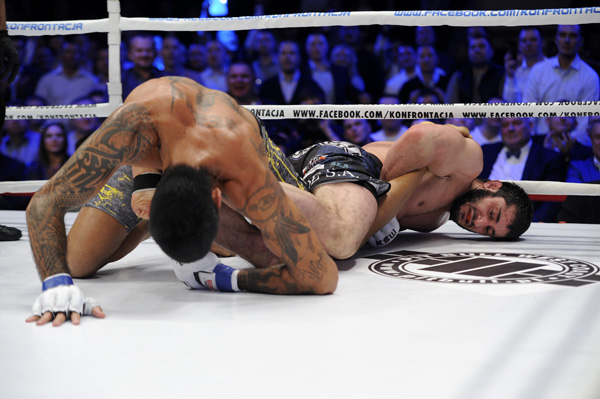 
In hindsight, discretion may have been the better part of valor for “The Ultimate Fighter” Season 3 winner Kendall Grove. He traveled a long, long way to lose.

A late injury replacement for Dutch knockout artist Melvin Manhoef, Grove submitted to a second round Achilles lock from Mamed Khalidov in the KSW 21 “Final Resolution” headliner on Saturday at the Torwar Arena in Warsaw, Poland.

Khalidov (26-4-2) had issues with Grove’s height and reach, often settling for leg kicks in rather pedestrian exchanges on the feet. In the second round, the 32-year-old Chechen moved to top position on Grove, fought through an armbar and isolated a foot for the finish. 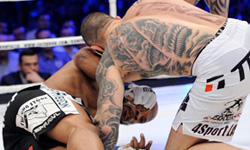 Meanwhile, Aslambek Saidov won for the eighth time in nine appearances and became the first welterweight titleholder in KSW history when a second-round leg injury resulted in a technical knockout against Borys Mankowski. Saidov (13-3) now owns a 9-1 mark in KSW.

Elsewhere, World Extreme Cagefighting and UFC veteran Maciej Jewtuszko avenged one of his two career defeats, as he submitted Artur Sowinski with a second-round brabo choke to capture the vacant KSW lightweight crown. Jewtuszko (10-2) coaxed the tapout 4:01 into round two.

Horwich (28-21-1) ran a clinic on Martin in the grappling department, neutralizing the Chicagoan’s notoriously heavy hands. The 34-year-old stepped up his attack late in round two, as he moved to mount and forged the finish with unanswered strikes from above. Martin, 32, has lost two of his last three fights.

In other action, the unbeaten Karolina Kowalkiewicz earned a unanimous verdict over Paulina Bonkowska in the lone women’s matchup, while once-beaten middleweight Piotr Strus rebounded from his first professional setback -- a submission defeat to Wendres Carlos da Silva in April -- to score a second-round technical knockout against Krzysztof Kulak.