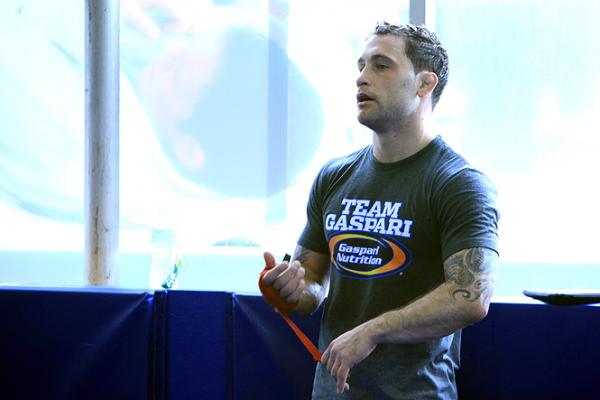 Well before the fight was made official in late August, Frankie Edgar had already spent some time preparing for a possible matchup against Jose Aldo, according to manager Ali Abdel-Aziz.

The former UFC lightweight titlist was apparently confident that he’d eventually cross paths with the current featherweight champion. Then, when Erik Koch withdrew from a title shot against Aldo on Oct. 13 at UFC 153, Edgar was offered the matchup sooner rather than later.

“Frankie called me and he said Dana [White] had called him and he offered him a fight against Jose Aldo,” Abdel-Aziz told the Sherdog Radio Network’s “Rewind” show. “Frankie just called me and we talked to Mark Henry, we talked to coach Ricardo Almeida, Frankie’s family, and we agreed. Five minutes later we called Dana and said we’d take the fight.”

Edgar had only taken three days off after his controversial split-decision loss to Benson Henderson on Aug. 11, Abdel-Aziz said. The decision to fight Aldo was a no-brainer.

“Frankie fought B.J. Penn two times,” Abdel-Aziz explained. “Gray Maynard. He fought Ben Henderson, Sean Sherk. These are all big fights. These guys are all great champions or most of those guys were champions. We definitely think Jose Aldo’s a great champion also, but this is something Frankie’s been training for all his life. Frankie had Jose Aldo on the radar for a while. Frankie had been training for Aldo for a while.”

A matchup between Aldo and Edgar had been talked about for some time. However, Edgar seemed reluctant to leave the 155-pound division. After a second loss to Henderson, the opportunity to drop to featherweight made sense.

“Honestly, Frankie always looks for a big fight,” Abdel-Aziz said. “At this point in Frankie’s career, Frankie wants to fight the best. He was probably going to fight 145 one time and fight Aldo. ... He said you know what? The UFC likes it, I like it. The fans want a superfight. Many superfights have been talked about, but nobody’s stepping up to the plate. Frankie said, ‘I’ll step to the plate and I’m going to give the fans what they want.’”

It doesn’t mean Edgar is done with the lightweight class, though.

“Frankie’s also keeping his eyes on the 155 division,” Abdel-Aziz said. “Frankie will go back one day. Hopefully he’ll get the title back and this title too. Hopefully he’ll have two titles.”

Listen to the full interview (beginning at 8:52).