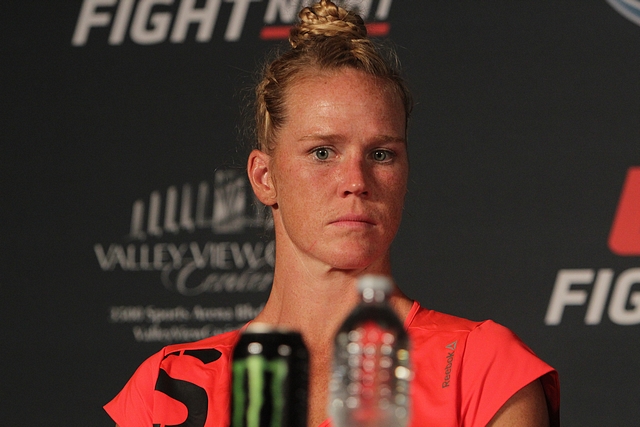 Holly Holm is in line for a big payday at UFC 193. | TJ De Santis/Sherdog.com


ALBUQUERQUE, N.M. -- Lenny Fresquez doesn’t want to say “I told you so,” – well, actually maybe he does.

Back in December 2013, Holm’s longtime manager confidently outlined his expectations for what it would take for his fighter to sign with the UFC.

“The UFC doesn’t have anybody but maybe five girls who can give Holly competition,” Fresquez told Sherdog.com. “We’re just waiting for them to give us the right opportunity to fight Ronda Rousey, because we want a title fight.

“We’re looking for six figures, and there’s not too many fighters in the UFC that make six figures,” he continued. “Holly’s a franchise, as you can see. She’s not just your normal fighter; she’s more of a franchise. To be honest, I think she’d represent as the face of the UFC better than Ronda Rousey.”

Keep in mind, at the time Fresquez made that statement, Holm was more than a year away from her Octagon debut and had just finished overwhelming 40-year-old foe Angela Hayes at a local event promoted by her manager. UFC President Dana White blasted Fresquez, calling him a “lunatic” and later denying that the Las Vegas-based promotion had any interest in Holm.

Fast forward to the present day, and Fresquez flashes a knowing grin when reminded of those comments. In just her third UFC bout, Holm has been booked to square off against Rousey in the UFC 193 main event on Nov. 14; the fight was moved from its originally announced date at UFC 195 when UFC 193 headliner Robbie Lawler had to withdraw from a welterweight title defense against Carlos Condit due to a thumb injury.

“Everything I said in that interview has come to fruition,” Fresquez told Sherdog at a recent media event at Jackson-Wink MMA. “There’s only one thing in the interview that hasn’t come to fruition, and that’s Holly taking the title from Ronda.”

That apparently includes Holm’s payday. While Fresquez would not divulge exact figures, he hinted that his six-figure demand has been realized.

To put it in perspective, Zingano made $18,000 for a title-shot clinching win over Amanda Nunes at UFC 178. She then garnered $100,000 for a 14-second submission loss to Rousey at UFC 184. In her last outing, Holm pocketed $50,000 for a decision triumph over Marion Reneau, so she figures to receive a substantial increase come Nov. 14.

While all seems to be going as planned, the Rousey opportunity arrived even quicker than Fresquez expected. The Olympic judoka was initially tabbed for a third meeting with rival Miesha Tate, while Holm was tentatively matched with sometime training partner Sarah Kaufman before plans changed. More seasoning would have been ideal, but Holm’s camp wasn’t going to turn down a bout against the UFC’s hottest commodity.

“Of course there was hesitation on my part. I asked them for one more fight and they said ‘No, this is the fight we would like you to take,’” Fresquez said. “We’re under contract and they’re our bosses.”

Rousey’s stock is currently at an all-time high. Her victory over Bethe Correia reportedly did more than 900,000 pay-per-view buys, a surprise figure considering her relatively unheralded opponent. Fresquez and Holm got an opportunity to see the Rousey phenomenon up close at UFC 184, when the former world champion boxer was promoted to the co-main event in her Octagon debut. That experience, Fresquez says, will be invaluable as hype builds for Holm’s first UFC title bout.

Now that Holm has arrived, Fresquez and White are on more cordial terms. The Albuquerque-based manager doesn’t take anything that might have been said in the past personally, however. He was only doing his job -- quite well, as it turned out.

“The UFC has treated us very good. I have nothing but praise for these guys – Dana, [UFC CEO Lorenzo Fertitta] have treated me great,” Fresquez said. “They treat Holly great. I was just doing my job. My job is to take care of Holly.