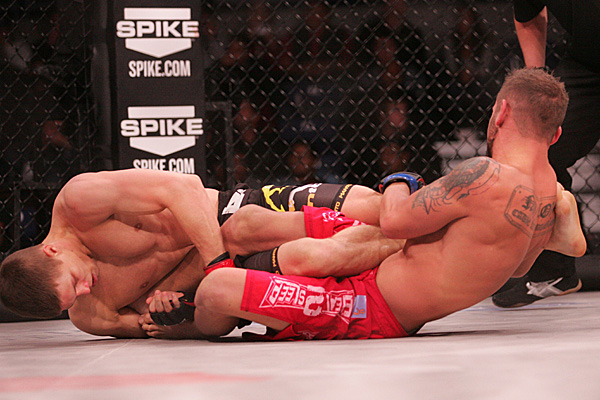 Held submitted UFC veteran Rich Clementi with a toe hold in the Bellator Fighting Championships Season 7 lightweight tournament semifinals at Bellator 81 on Friday at the Ryan Center in Kingston, R.I. Clementi (45-22-1, 2-1 Bellator) conceded defeat 3:04 into round two, his modest three-fight winning streak a thing of the past. 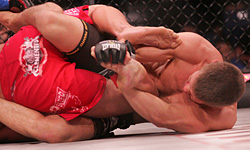 The 20-year-old Held (15-2, 4-1 Bellator) was relentless in his pursuit of the finish. The two semifinalists spent virtually the entire first round trading attempted leg locks, Held moving from the heel hook to the toe hold to the kneebar. None were successful. In round two, Clementi scored with a powerful takedown, only to leave the slightest of openings. Held threaded his leg into position from the bottom, secured the toe hold and forced Clementi to submit.

“Rich is a very good, very tough opponent,” Held said. “This is the best feeling in the world.” 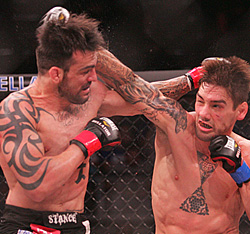 
His game plan heavy on aggression and light on caution, World Extreme Cagefighting veteran Dave Jansen eked out a controversial split decision over Ricardo Tirloni in the Bellator Season 7 lightweight tournament semifinals. All three cageside judges scored it 29-28, two of them siding with the 33-year-old Oregonian.

Jansen (18-2, 5-0 Bellator) did his best work in the first round, where he floored his Brazilian counterpart with a clean left hook and scored with a pair of takedowns.

Tirloni (15-3, 2-2 Bellator) seemed to bounce back in the second, as he cracked the Sports Lab representative repeatedly with left hooks, right crosses and a stiff left jab.

Round three followed a similar narrative, as Tirloni stayed one step ahead in the standup, beating the American to the punch. Jansen made his final plea to the judges in the closing seconds, as he transitioned to Tirloni’s back and scored with a belly-to-back suplex.

“I’m feeling great,” Jansen said. “I kind of pictured the fight like that. Tirloni’s definitely got heavy hands. I felt like I was able to make him miss and make him pay.” 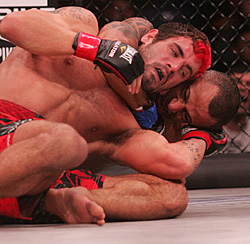 
Former Sengoku champion Marlon Sandro needed a little more than two minutes to dispatch Dustin Neace, as he rendered “The Ultimate Fighter” Season 14 alum unconscious with a rear-naked choke 2:05 into the first round of their featherweight showcase.

Sandro (23-4, 6-2 Bellator) backed up a left hook with a takedown and moved immediately to side control. The situation only grew more troubling for Neace (23-19-1, 0-1 Bellator). Sandro transitioned to his back after an ill-advised heel hook attempt, snaked his arms around the neck and brought the bout to a close.

The 35-year-old Sandro still has never suffered back-to-back defeats as a professional. 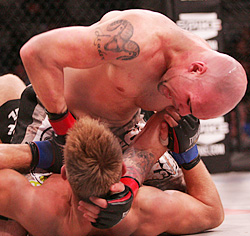 
Team Link’s Perry Filkins recorded the most significant victory of his career, as he took a unanimous decision from highly touted German prospect Jonas Billstein in a featured middleweight battle. All three cageside judges scored it for Filkins (7-1, 1-0 Bellator) by 30-27, 29-28 and 29-28 counts.

The two middleweights appeared to split the first two rounds, giving way to a decisive third. There, a Billstein front kick to the face seemed to get Filkins’ adrenaline pumping. The 24-year-old American channeled his inner Ric Flair, ramped up his aggression and stayed busy with heavy power punches.

Filkins sealed it in the final half minute when he moved to full mount after a fatigued Billstein (10-3, 1-2 Bellator) inexplicably pulled guard. Punches and elbows were unleashed, sending Filkins to his fifth consecutive victory. 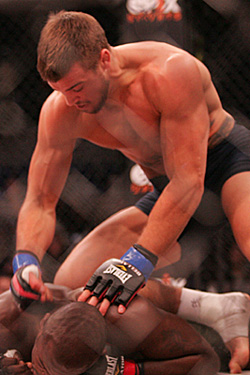 
In preliminary action, American Top Team’s Dan Cramer knocked out Joseph Lamoureux with a series of savage right hands 3:26 into round one of their middleweight duel; Ring of Combat veteran Andrew Calandrelli submitted Eric Brown with an armbar 3:10 into the second round of their lightweight bout; Russian import Murad Machaev captured a unanimous verdict from Lorawnt-T Nelson in 167-pound catchweight battle, sweeping the scorecards by matching 30-27 counts; Mike Mucitelli stayed undefeated and submitted Shark Fights veteran Matt Uhde with an armbar 26 seconds into round one of their 210-pound catchweight tilt; Brennan Ward kept his perfect professional record intact, as he put away Sam McCoy with punches 2:49 into the first round of their middleweight encounter; and Matt Bessette recorded his seventh win in nine appearances with a unanimous decision over “The Ultimate Fighter” Season 12 alum Paul Barrow at 155 pounds, earning 29-28, 30-27 and 30-27 nods from the judges.