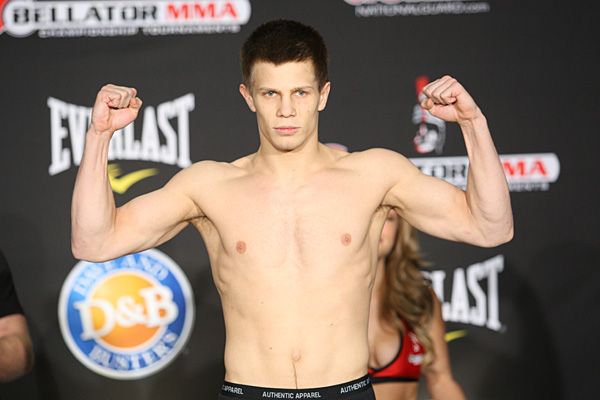 Marcin Held may be young, but he is not naive.

The 21-year-old Polish prospect fully comprehends the importance of his Bellator 93 clash with Dave Jansen. Should Held earn a victory tonight at the Androscoggin Bank Colisee in Lewiston, Maine, he would take home a $100,000 payday and a guaranteed lightweight title shot. With so much riding on his performance, the submission ace has prepared diligently for what he believes will be his toughest test to date.

“I know [Jansen] is a guy with big experience, and he’s very good,” Held recently told Sherdog.com. “I suspect it will be the hardest fight for me, but every fight should be harder than the previous one.”

Held was supposed to meet Jansen twice previously to close out the Season 7 tournament, but the bout was delayed both times. As a result, both fighters have had a full three months to prepare for the coming combat, a fact that was both beneficial and frustrating for Held.

“On one [hand], [the delays] were bad for me. It was annoying to wait for such a long time,” said Held. “But [on the other hand], I had more time to improve my technique. So it was both good and bad.”

Tonight’s matchup marks the culmination of Held’s five-fight Bellator career, which began two years ago in a Season 4 quarterfinal matchup with eventual tournament winner and world champion Michael Chandler. Held caught the future titlist in a deep kneebar but was unable to finish the hold, allowing Chandler to escape and win the fight just minutes later with an arm-triangle choke. Though Held still remembers how close he was to handing Chandler his first loss, the Pole is more concerned with his future than with his past.

“I remember [the kneebar], but it’s not really important for me. I went over it, but it’s not something that [troubles] me. I don’t think about it all the time, and I don’t have a problem with it,” Held said. “I know that my time is still ahead, and I know have a lot to learn yet. If something goes wrong, I know I have time, and I hope, if not now, I will be champion in [the coming] years.”

Held advanced to the Season 7 finals by outpointing Russian talent Murad Machaev before submitting UFC veteran Rich Clementi with a second-round toehold last November at Bellator 81. In Jansen, Held now faces a gritty wrestler with solid boxing and an ample gas tank. Held is well aware that most believe his best shot to defeat the World Extreme Cagefighting vet is via submission, a prospect that could prove difficult considering Jansen’s superior wrestling pedigree. Nevertheless, Held said he has prepared himself to navigate that hurdle when the time comes.

“We know that Dave Jansen will try to keep the fight standing, but we are ready for this,” said Held. “We’ve trained a lot for this situation, and I am ready.”