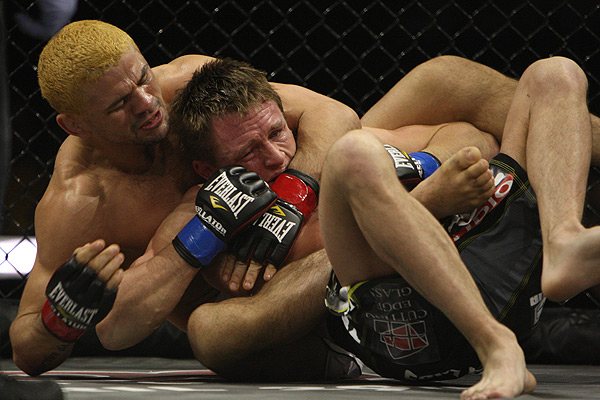 
It’s been nearly four years since Marcos Galvao’s journey to Yuma, Ariz., for his Bellator debut resulted in confusion and disappointment.

That night, Galvao nullified Joe Warren’s wrestling and landed the bout’s most meaningful offense en route to what seemed to be a clear-cut decision triumph. At least that’s what most observers thought until the final scorecards revealed that Warren had escaped with a perplexing unanimous nod.

Maybe it was something in the Arizona air, because Galvao’s luck did not improve in a return trip to Yuma later that year, as he dropped yet another contentious verdict – this time to Alexis Vila via split decision at Bellator 55.

The loss to Warren earned Sherdog.com’s ”Robbery of the Year” honors for 2011 and prompted then Bellator President Bjorn Rebney to admit that Galvao “hadn’t gotten a fair shake in that fight in the judges’ eyes.”

While those losses might have permanently traumatized a lesser fighter, Galvao hasn’t dwelled on the injustice he was dealt in the desert. Instead, the 33-year-old Brazilian has won six of his last seven fights to earn a shot at bantamweight gold at Bellator 135 on Friday night.

This isn’t just any title shot, though, as Galvao will also get a chance to avenge his controversial setback to Warren, who defeated Eduardo Dantas last October to become the promotion’s 135-pound king. For Galvao, the rematch has been a long time coming.

Like Galvao, Warren has been gathering momentum in recent months. After brutal knockout losses to Vila and Pat Curran seemingly sent the self-proclaimed “Baddest Man on the Planet” on the road to retirement, the Greco-Roman specialist has won five straight fights under the Bellator banner. His run culminated with a hard-fought five-round triumph over Dantas at Bellator 128, where Warren was able to wear down the Nova Uniao star with a typically grinding approach.

Galvao was not particularly surprised -- or impressed -- by Warren’s performance.

“He really didn’t impress me in anything because what he did was exactly what I expected him to do,” Galvao said. “He likes to move forward; he keeps a lot of pressure. But Eduardo’s Eduardo and I’m a different fighter. I’m not easy to take down. I’m not surprised because I knew that Joe Warren is very good with the takedowns. That’s why I wasn’t really impressed: I expected that from him.”

Although his record might not show it, the Rio de Janeiro native was able to effectively thwart Warren’s bread-and-butter once already, and he believes he has the tools to do it again when they lock horns at the Winstar World Casino in Thackerville, Okla.

Perhaps more importantly, Galvao says he has improved in all aspects since that April night in Yuma. If he hadn’t, this opportunity might not have arrived.

“I think I’ve improved in every aspect of MMA, really. They physical aspect, the mental aspect, just all-around improvement,” he said. “There’s not a specific area; I think just in everything I got better.”

Now he just has to hope that those cageside -- even if the names and faces have changed -- have done the same.