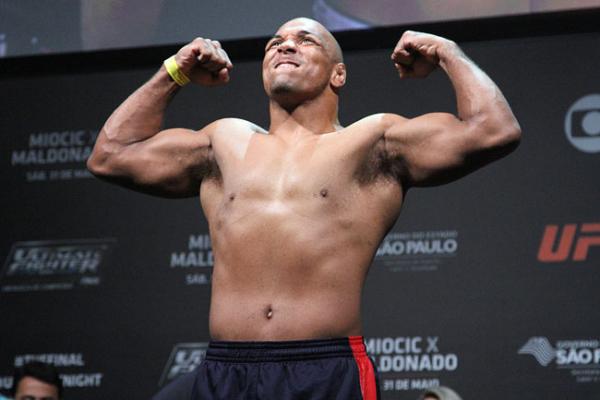 
With an extensive record of 81 kickboxing bouts, 15 boxing bouts and 17 MMA bouts, Marcos Rogerio “Pezao” de Lima entered “The Ultimate Fighter: Brazil 3” as a favorite in the heavyweight division.

“Fighting in the UFC through ‘TUF’ has always been my dream,” Lima recently told Sherdog.com. “When they opened tryouts at middleweight, light heavyweight and heavyweight, I enrolled for all three.”

The 6-foot-2 Sao Paulo native fought his way into the house by submitting Thiago Santos, then earned a unanimous decision over Jollyson Francino before being eliminated in the semifinal against eventual winner Antonio Carlos Jr. When talking about what he described as “the best experience” of his career, de Lima had high praise for his coach, Chael Sonnen.

“I always admired Wanderlei [Silva], but I saw ‘TUF: Brazil 1’ and ‘TUF 17,’ so I knew Chael could be a better trainer for me, working on my weak points. I always wanted to be on his team,” said the Brazilian.

During filming for “TUF: Brazil 3,” de Lima developed a close friendship with the “American Gangster.”

“It was such an amazing experience to be trained by him. When you know the real Sonnen, it’s funny to see him playing the bad guy to promote fights,” said de Lima. “He’s such a nice human being, always concerned with every fighter on the team. He didn’t need to visit us in the house on the weekends, but whenever one of our middleweight guys was cutting weight, he came to help us. The way he motivates his fighters is really amazing.”

De Lima pointed to the infamous in-gym scrap between coaches Sonnen and Silva as a turning point in the season.

“Before that, we were suspicious about the ‘character Sonnen,’ but after what happened, we formed a group and agreed that we wouldn’t leave Chael alone. It’s what made our group united.”

After scoring a 20-second knockout of Richardson Moreira at the “TUF: Brazil 3” finale, Pezao is sure that he will have another chance to compete inside the Octagon.

“I can’t say anything for sure now, but my manager Alex Davis told me that good news is around the corner,” said de Lima, who is currently on diet to make 185 pounds by mid-August. “Alex just wants to make sure that I can reach [185 pounds] healthily.”

While waiting for a call from the UFC for his middleweight debut, de Lima has made plans to visit Sonnen in the U.S.

“He invited me to spend some time training in the U.S. with him and the trainers -- Scott [McQuary], Clayton [Hires] and Jamie [Huey] -- who also helped me a lot in the house. My plan is to spend three weeks there and three more weeks at American Top Team. Spending some time in the U.S. improving my wrestling would be great.”