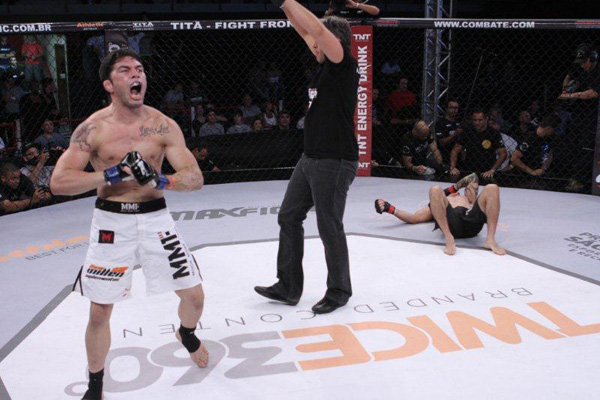 
SAO PAULO -- Rony “Jason” Mariano, Team Nogueira's hot prospect, didn't need much effort to capture Max Fight's featherweight title on Thursday night, forcing local Reginaldo Vieira to tap after a tight armlock from the triangle at 1:25 of the first round.

“Jason” moved his record to 9-3 -- all the wins via decision -- and is undefeated since a TKO loss to Bellator veteran Genair da Silva in 2009.

From the outset, Jason was aware of what he needed to do to return home with the Max Fight belt. He started the fight pressuring Vieira, who was pushed against the fence and got knocked down with a precise overhand right. Jason started working his vicious Brazilian jiu-jitsu guard game until he got Vieira trapped in a triangle. He then moved to an armbar after his opponent tried to slam him on the ground. The referee stopped the fight before Vieira could tap due to the bizarre extension of his arm, which was almost broken.

After the fight, Mariano affirmed that he hopes to get a shot at UFC, a move that could happen at bantamweight. “There is no deal yet,” he said. “But people from my side are trying to negotiate with [the] UFC, and I hope next year I'll get a chance over there.”

In the co-main event, respected national fighters Viscardi Andrade and Marinho Rocha put on a great show, with an exchange of positions both in striking and in the ground game. Andrade, a black belt from the Ryan Gracie Team in Sao Paulo, used his higher reach to keep Rocha at bay and defeated him via split decision. Fernando Lopes and Sergio Almeida scored the bout 29-28 for Andrade, while Francisco Fonseca scored it 29-28 in favor of Rocha.

Earlier, Brazilian jiu-jitsu specialist Serginho Vieira and muay Thai expert Guilherme Faria faced off in a contrast of styles. Vieir's strategy prevailed, as he got the fight to the ground and submitted his opponent with a guillotine at the 4:55 mark of the first round.

Also on the card, Antonio Magno tapped out Marcio Nunes at 2:14 of the first round with a rear-naked choke, Rodrigo Mamute submitted Salvador Minitti with a toe hold, and Charles Maicon knocked Kell Santos out cold in only 17 seconds. Vagner Santos tapped out to Fabio Moraes after a tight keylock at 2:09 of the opening period. Mylla Souza took a unanimous decision from Sandra Maria, with all three judges scoring the fight 29-28.