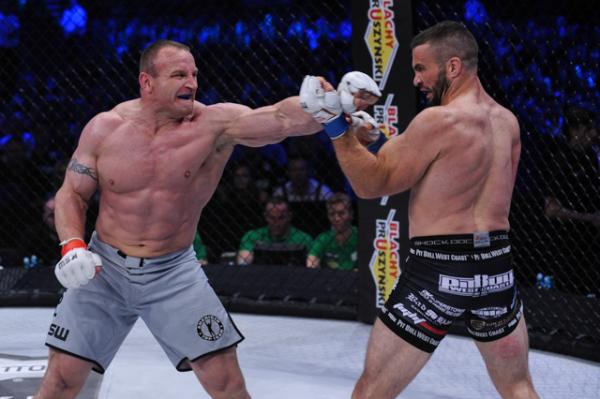 
Strongman Mariusz Pudzianowski will attempt to earn his fifth consecutive victory when he squares off against kickboxing specialist Peter Graham in the Konfrontacja Sztuk Walki 32 main event on Oct. 31.

In addition to the heavyweight headliner, the Polish promotion also announced two other matchups for the card, as Jim Wallhead will face Rafael Moks at welterweight, and Oli Thompson will meet Michal Wlodarek at heavyweight. KSW 32 “Road to Wembley” takes place at Wembley Arena in London and is will be available via pay-per-view at KSWTV.com.

Pudzianowksi made short work of Rolles Gracie in his most recent bout, as he dispatched the grappling ace via technical knockout in 27 seconds at KSW 31 on May 23. The 38-year-old has also posted victories over Pawel Nastula, Oli Thompson and Sean McCorkle during his current run. “Pudz” plans on making a statement against Graham.

“Defeating Graham is one of my last steps on my road to KSW heavyweight title, which is currently in Karol Bedorf’s hands,” Pudzianowski said in a release. “Peter is a tough and experienced foe, but come Oct. 31 I’ll show everyone that I can beat him more decisively than Bedorf did.”

Graham has lost four of his last five fights, including a unanimous decision defeat against Bedorf at KSW 31. The 39-year-old Australian’s lone win during that time came at KSW 28, when Marcin Rozalski suffered a knee injury in the second round of their bout.