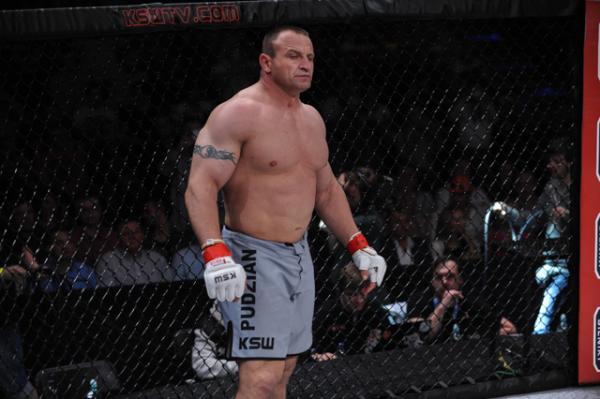 Mariusz Pudzianowski is on the longest winning streak of his MMA career. | Photo: Piotr Pedziszewski/Sherdog.com


Two heavyweights with identical MMA records and decidedly different fighting styles are set to square off in the cage of Polish organization Konfrontacja Sztuk Walki.

Famed strongman Mariusz Pudzianowski and Brazilian jiu-jitsu black belt Rolles Gracie will meet at KSW 31 “Materla vs. Drwal,” the promoter announced on Monday. The event takes place May 23 at Ergo Arena in Gdansk, Poland, and is topped by a middleweight bout between KSW middleweight champ Michal Materla and UFC veteran Tomasz Drwal.

Pudzianowski is currently riding a three-fight winning streak, the longest of his fighting career. His victories over Sean McCorkle, Oli Thompson and, most recently, countryman Pawel Nastula have all come by way of decision. The hard-hitting 38-year-old is also expected to compete against an as-yet-unannounced opponent when KSW makes its British debut in October.

Gracie, 36, will look to break a two-fight skid. His lone World Series of Fighting appearance saw Gracie knocked out by Derrick Mehmen in September 2013, and last October the Rio de Janeiro native was stopped by Karol Bedorf via first-round strikes in a failed bid for the KSW heavyweight title. A member of MMA’s most famous family, all eight of Gracie’s MMA wins have come by way of submission.