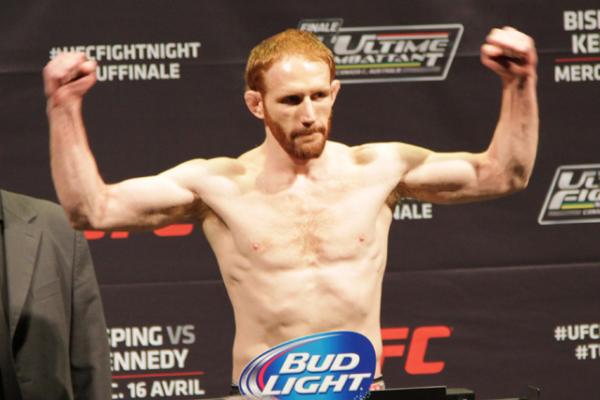 
Mark Bocek has been retired from mixed martial arts for a little over a week, but already the former UFC lightweight is making clear what contributed to his exit from the sport.

While it has become public knowledge that Bocek’s stance on the use of performance-enhancing drugs within MMA played a large role in his retirement following an April win against Mike de la Torre, other factors also came into play.

In an interview with Sherdog.com on Saturday, the Tristar Gym member elaborated on his career-ending decision and why overstaying his welcome was never an option.

“Don’t get me wrong, I wasn’t cut from the UFC. ... I still could have fought. I clearly could have, but at the same time, I’m a realistic person. I’d rather go out like this on a victory, which is a good memory of the sport, rather than going out like Randy Couture, Matt Hughes, Chuck Liddell, or B.J. Penn,” Bocek said. “I look up to all of them a lot. The only problem I think they had is that they weren’t very realistic about their careers and thought they could go on, but I guess the difference is I am more realistic and understand my physical and mental limitations.”

For a fighter to speak of “limitations” when he has never lost consecutive bouts and was victorious in his last outing is fascinating. But the Canadian remains steadfast in believing the time is now, before something outside of his control forces him out.

“Most fighters don’t really enjoy fighting, I think there’s a big misconception there. I enjoy winning, competing and getting paid. When it happens, great, but when it doesn’t happen, it’s not so great. The sport will really bring you down, step on you and test you to see how far you can go. The allure of one more fight is always there. It’s $30,000 just to step in the cage, win or lose. But on fight night, you always wonder what you’re actually doing there,” Bocek said. “I mean, you can always get another payday, sure, but someone like me, I’m not a champion. I’m not making big, big money. That money goes away quick. I’d rather walk away with a victory than a loss and end up hating the sport.”

Following his win against de la Torre, Bocek went on a sabbatical of sorts to weigh out his options and decide if he still wanted to compete. It wasn’t long before UFC matchmaker Joe Silva came calling, ready to book Bocek’s next tilt.

“I had two or three more fights on contract,” Bocek said. “Joe messaged me. He mentioned an opponent. I think he mentioned Matt Wiman at the time.”

But, in the end, the bout never came to fruition. The dwindling desire to put his body through the rigors of fighting, paired with an evident substance problem within MMA was too much to endure. Bocek decided to hang up his gloves for good.

“[PEDs are] pretty rampant, but that goes along with any combat or athletic sport where there’s any notoriety and especially financial gain involved. You can either turn a blind eye to it, which is much easier when you don’t have to deal with it yourself, because you’re not fighting, so it’s easier to ignore those things,” Bocek explained. “But, when you’re actually in the mix of it, it’s pretty difficult. Obviously, I’m not going to mention any names or anything without legitimate proof because that makes me look weak and bitter and sour, and looks like it’s the only reason why I’m quitting. It’s one of the reasons I am quitting, for sure, but it’s not the only reason.”

What must be done to solve this problem? Bocek feels that random drug testing works, but in order for it to be successful, everyone must fully support it -- something the 32-year-old understands is hard for the UFC to do because of its vested monetary interest in fighters using the substances to continue competing.

“Random testing works. All the guys that have gotten random-tested failed. But they cost money, they are expensive. It appears to me like UFC is kind of against drug testing because if we use any of these VADA voluntary doping tests or clinics, these results come out before actual fights, so you don’t get to cash in your pay-per-view money. If we stick with the laxed commission testing, all those results come out after the event, so just in my opinion, I don’t really think they are for testing,” Bocek said. “But yeah, it looks like most people are on drugs and the more successful you are, the more money you have. The more money you have, you get targeted by guys like Victor Conte or some chemist and they’ll come up with a drug you can’t test for or is undetectable because you have the money for those things.”

While Bocek isn’t necessarily sure what the future holds, but he is aware the transition will be difficult. Citing a fighter like Chris Leben, who made it clear he didn’t have anything to show for a 10-plus year career.

“It’s different when you’re someone like B.J. Penn and you never fought for money, you always had money, it was something you enjoyed. For the most part, that poverty issue is something that makes a lot of fighters fight when they shouldn’t fight. Chris should have never came back and fought,” Bocek said. “But what is left for these guys after? Especially for those with no education and the guys that have attached themselves to MMA. There’s really not much left for them. You see guys that want to open gyms, but they aren’t very good businessmen so all the non-credible instructors make the money. It’s pretty tough. It’s not like there’s an abundance of options once you leave this. It’s great for guys like Anderson [Silva] or Georges [St. Pierre] once they leave, but for guys like Leben or me, it’s tougher.”

Bocek, a Brazilian jiu-jitsu black belt, didn’t rule out competing in a grappling tournament such as Metamoris in the future. But he did close the door on his career inside the Octagon, making it clear that April 16, 2014, was the last time MMA fans would ever see him fight.

“I might do a grappling tournament here or there. I’m not shutting the door on that. But I will never step foot in the cage for an MMA fight again. I can promise you that.”