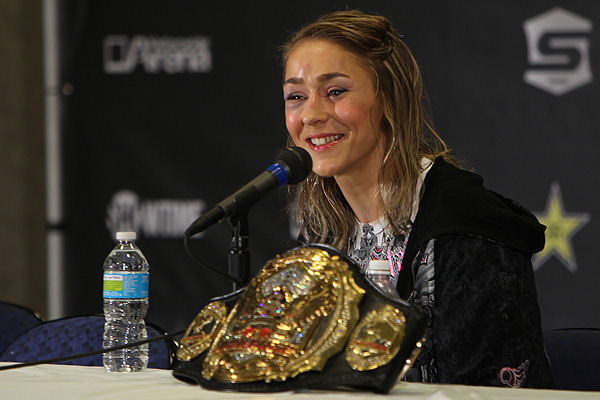 
The upcoming bout between Ronda Rousey and Miesha Tate has drawn plenty of attention toward women’s mixed martial arts. On April 28, the Invicta Fighting Championships will attempt to take things a step further with the launch of its all-female fight series.

The promotion officially announced its first event on Monday, an 11-bout card headlined by a rematch of a 2008 bout between former Strikeforce 135-pound champion Marloes Coenen and Romy Ruyssen. Coenen defeated Ruyssen via rear-naked choke in their first meeting, the only defeat of the Frenchwoman’s six-fight career.

Coenen last competed in at Strikeforce/M-1 Global “Fedor vs. Henderson” where she relinquished her title to Tate after submitting to an arm-triangle choke in the fourth round. The 30-year-old Golden Glory representative has finished 14 of her 19 bouts by submission.

“I am honored to headline Invicta’s first fight card, and I am looking forward to earning another win over Romy,” Coenen stated in a release.

Ruyssen has won four straight since falling to Coenen, with each triumph coming via first-round submission. Most recently she forced Florence Berthe to tap out to a guillotine last November.

“Marloes is a great fighter, but she doesn’t quite have the ground game that I have. I am going to take her down and finish her,” Ruyssen said.

An export of Reign MMA, Penne has been out of action since she defeated Amy Davis with a rear-naked choke in November 2010. Five of the Laguna Hills, Calif., native’s eight career triumphs have come by way of tap out.

Ellis-Ward will be looking to rebound from back-to-back losses to Megumi Fujii and Jessica Aguilar in the Bellator Fighting Championships. Based out of the United Training Center, the 29-year-old was victorious in her first two appearances with the Chicago-based promotion, besting Stephanie Frausto and Aisling Daly.

The Invicta Fighting Championships are spearheaded by promotion vice president Shannon Knapp, who recently worked as head of fighter relations and in matchmaking with Strikeforce.

“The time has come for a platform dedicated exclusively to building the growing women’s division in our great sport,” Knapp said. “Invicta is committed to increasing the depth of the women’s field and building female superstars by providing women athletes with the opportunity to compete and hone their skills on a consistent basis throughout the year.”