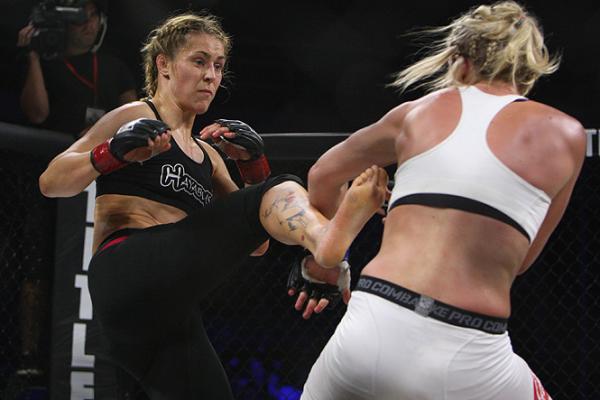 A women’s clash between Marloes Coenen and Fiona Muxlow has been added to the developing Dream 18 fight bill, which will air via tape delay on the CBS Sports Network.

Promoted by Glory Sports International, the Dec. 31 event takes place at the Saitama Super Arena in Saitama, Japan, and will also feature Glory World Series’ single-night, 16-man kickboxing tournament. That portion of the card airs in the United States at 10 p.m. ET on New Year’s Eve, while Dream’s MMA action will be broadcast at the same time on the following night.

Headlined by a lightweight showdown between former Dream belt holder Shinya Aoki and onetime UFC talent Antonio McKee, Dream 18 “Special NYE 2012” will also air live on Canada’s Fight Network and streams worldwide via pay-per-view on GloryWorldSeries.com. A former Strikeforce bantamweight queen, Coenen, 31, signed with the all-female Invicta Fighting Championships earlier this year following her departure from Strikeforce last year. The Golden Glory fighter was victorious in her Invicta debut this past April, taking a unanimous verdict from Romy Ruyssen in a rematch of their 2008 affair. Regarded as one of the world’s top female talents, the 12-year pro captured the Strikeforce 135-pound belt by submitting Sarah Kaufman in 2010 and did the same to Liz Carmouche before dropping the strap to Miesha Tate nearly a year and a half ago at “Fedor vs. Henderson.”

Muxlow, 35, returned to the cage in July after spending 16 months on the shelf. The Australian fighter has tasted defeat just once in her seven-fight pro career and rides a three-fight winning streak into her Dream debut, most recently earning a unanimous decision over countrywoman Leanne Reid on Oct. 27.