BRASILIA, Brazil -- The 51st anniversary of Brasilia couldn’t have been celebrated in a more Brazilian way: just fewer than 8,000 people filled Nilson Nelson Gymnasium in the nation’s capital, free of charge, to see the 27th edition of the country’s greatest MMA event, Jungle Fight.

The show was highlighted by a cast of talent from all corners of Brazil but, the night belonged to the Amazon’s Adriano Martins, who earned the Jungle Fight interim lightweight title with a first round knockout of local lightweight Ronildo Braga. 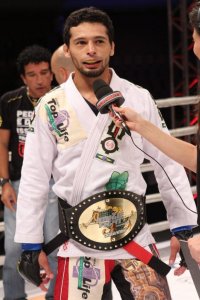 Less than a minute into the fight, Martins landed a cross that put Braga on the mat. It was clear to all in attendance that the bout wouldn’t last: not long after, a powerful knee put Braga on the mat, and sensing his opponent was hurt, Martins finished the bout with a sequence of punches that left his opponent unconscious at 2:54 of the first round.

“I’ve been working hard for so long. I hope now Jungle Fight gives me an opportunity to fight out of Brazil," Martins said after the bout.

However, Martins’ road out of Brazil will be a tough one: Ismail told Sherdog.com that Martins will likely defend his interim title in June, in his home city of Manaus, against powerful prospect Francisco "Massaranduba" Drinaldo.

After his one-night tournament win under the Nitrix banner in February, 20-year-old John Lineker impressed the masses. However, many wanted to see how the Paranagua native would fare against more experienced fighters, such as Bahia’s Renato Velame, a BJJ black belt and student of Luiz Carlos Dorea, much like the Nogueira brothers and Junior dos Santos. 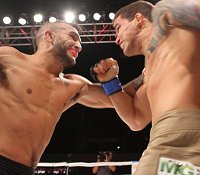 M. Alonso
John Lineker (left) is Brazil's new
bantamweight phenom.
Velame was no match for Brazil’s new bantamweight phenomenon, however. Lineker impressed once again with his aggressive style, landing a rush of punches that left Velame dizzied, and folloing up with heavy ground-and-pound. Once the fight was on the mat, Lineker took his opponent’s back and choked him out at 2:58 of the opening period.

The win was Lineker’s 11th straight victory, all in the last 14 months.

Showing absolutely no standup ability, an overweight Nunes was clearly scared of his opponent’s hands, but managed to knock De Oliveira down and fit him for a guillotine at the end of the first round. However, “Crocota” was much more aggressive in round two: after knocking Nunes down in the first minute of the round, the Baiano landed a big cross that left Nielsen unconscious between the ropes at 3:12 of the second frame.

The event also was marked by some unexpected performances. Little-known featherweight Rafael Miranda -- a product of Brasilia’s Constrictor and teammate of Rani Yahya, Paulo Thiago and “Massaranduba” -- took on the much more experienced Fabiano "Jacarezinho" Silva and was badly punished in the first round. 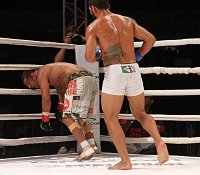 M. Alonso
'Crocota' sent 'Grilo' through the
ropes.
However, after being punched, mounted and nearly choked out with an arm-triangle, Miranda took over the second and third rounds and made the crowd cheer like mad. The bout changed instantly, as Miranda dominated both striking and grappling to win a unanimous decision (29-28, 29-28, 29-28) and further prove that Constrictor Team is an endless factory of talent.

Local lightweight Leo Pinheiro was impressive for two rounds against tough Natalense veteran Rivanio "Aranha" Regiz. However, after 10 minutes of domination and two knockdowns, Pinhiero showed his lack of grappling experience and fell into a guillotine choke, tapping out one minute into the third frame.