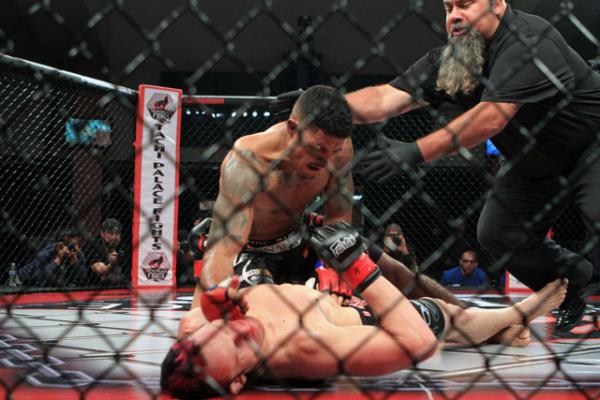 
Max Griffin brought the festivities at Tachi Palace Fights 21 to a swift and brutal conclusion on Thursday, as he knocked out Ricky Legere Jr. with a short right hand in the welterweight title headliner at the Tachi Palace Hotel and Casino in Leemore, Calif. The end came 3:21 into the opening frame and was Legere’s first knockout defeat since he was stopped by current UFC talent Bobby Green in 2010.

Although Griffin (10-1) rendered Legere (19-6) unconscious with his right hand, the 28-year-old Sacramento, Calif., native landed four to five unanswered hammerfists on the mat before referee Jason McCoy could intervene to stop the bout.

A stretcher was brought to the cage for Legere, but the Strikeforce, Bellator MMA and King of the Cage veteran ultimately shrugged off the assistance and returned to his feet on his own power. Griffin, with six straight wins under his belt, professed a desire to move to the next level in the aftermath.

Willie Gates took his bout against Tachi Palace Fights flyweight champion Hector Sandoval on less than one week’s notice. His willingness to step up paid off, as he claimed 125-pound gold with a dominant first-round stoppage in the co-main event. A wicked left hook dropped Sandoval, and Gates needed only one follow-up right hand on the mat before the bout was called off at the 1:23 mark.

“Always bet on black,” said a jubilant Gates (11-4), as he danced in the center of the cage during a post-fight interview.

Sandoval (8-2) never had a chance to get going. The taller Millennia MMA representative rocked his adversary with a knee early and manhandled exchanges in the clinch when Sandoval attempted to close the distance. The decisive blow came shortly thereafter, bringing a shocking end to Sandoval’s eight-fight winning streak. Gates, meanwhile, has won five straight, finishing all of his victims inside of a round.

After two competitive rounds, Adrian Diaz put an emphatic stamp on his featherweight matchup with Isaac DeJesus in the third, stopping the six-time TPF veteran via technical knockout 37 seconds into the final frame. 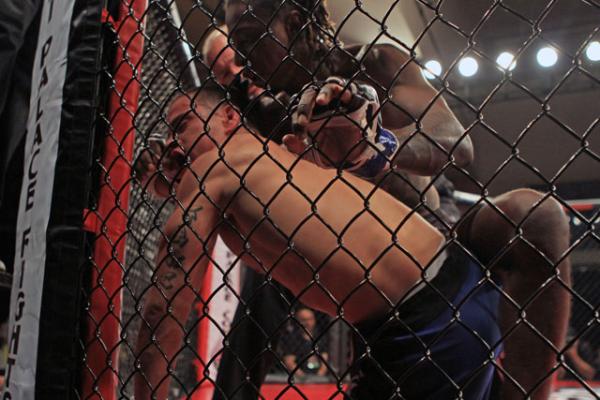 (+ Enlarge) | Photo: J. Sherwood/Sherdog.com
Gates devastated Sandoval.
An overhand left from the Team Alpha Male product wobbled DeJesus and put him on the defensive. Diaz denied his foe’s desperation takedown attempt, however, and was able to create enough space to unload and send DeJesus to the canvas. A flurry of follow-up blows on the mat forced referee McCoy to call a halt to the contest.

Anthony Figueroa cruised to a unanimous decision triumph over Luis Gonzalez in a flyweight tussle. All three judges submitted 30-27 scorecards in favor of the American Kickboxing Academy product.

Figueroa (10-7-1) controlled the tempo of a bout that was contested primarily on the feet. He confounded Gonzalez (5-4) with his movement and crisp combinations while slipping punches and countering effectively when his opponent attempted to close the distance. After dominating the standup, Figueroa punctuated his victory with a pair of takedowns in round three.

Rolando Velasco garnered his fifth consecutive win -- and fourth under the TPF banner -- with a first-round submission of Sergio Cortez in a lightweight clash. The end came 3:08 into the opening stanza, as Cortez succumbed to an arm-triangle choke.

Velasco (10-2-1), who also defeated Cortez via second-round TKO in his professional debut in 2006, imposed his will throughout, setting up a takedown with a one-two combination at the outset and dominating position from there. When Cortez (9-10) escaped to his feet, Velasco responded by locking him in a standing arm-triangle choke. Velasco then dragged his man to the mat while maintaining the hold and eventually rendered Cortez unconscious.

Team Alpha Male product Mario Soto survived a severe beating in the opening stanza to stop Dominic Clark via technical knockout at the 4:56 mark of the second round of a lightweight scrap. Clark (7-4) seized momentum early by landing a vicious knee and, with Soto woozy, proceeded to pummel his foe with power punches near the fence. The expected finish never arrived, however.

Somehow, Soto (6-1) regained his senses and turned the tide late in the round, even threatening with a rear-naked choke before time expired. He continue his surge in round two, eventually taking back mount and landing a series of unanswered blows to put away his fatigued adversary.

Tony Llamas bullied and battered Alexander Crispim (8-6) en route to a second-round technical knockout victory in a 148-pound catchweight affair. Llamas (13-15) unloaded on his foe with power punches, bloodying his opponent and eventually forcing the cageside doctor to call a halt to the bout 2:10 into the period.

J.C. Llamas (5-4) earned a somewhat anticlimactic victory over Kenny Ento in their welterweight bout when Ento collapsed in the second round due to exhaustion. The end became official when Ento (14-14) verbally submitted 2:42 into the frame. The Visalia, Calif., resident had to be helped from the cage after the decision was announced.

Mike Olson (1-0) tapped Anthony Torres (0-1) with a guillotine choke 1:44 into the opening period of their flyweight clash. Olson was able to secure the submission when Torres attempted to slam his way out of danger, a decision that only enabled Olson to tighten the hold.

Alex Barajas (2-2) rallied from the brink of defeat to submit Evan Solorio (0-1) with a triangle choke 3:38 into the second round of their lightweight clash. Moments earlier, Solorio appeared to have his foe reeling, as he swarmed with heavy punches in anticipation of a finish. However, Barajas made Solorio pay for venturing into his guard by transitioning to the fight-ending maneuver.

In the opening bout, Art Hernandez (1-0) stopped Joshua LaGrange (2-6) via ground-and-pound 3:12 into the second round at a 165-pound catchweight.