FAIRFAX, Va. -- His fight with Nate Diaz was, if he was successful, expected to position him for a title shot against lightweight champion B.J. Penn. But Gray Maynard’s split decision victory in the UFC Fight Night 20 main event on Monday at the Patriot Center came at the end of a tit-for-tat striking exchange that did not leave a decisive winner or contender.

Maynard, one of the best wrestlers in his division, insisted on engaging Diaz in a punching battle despite his opponent’s six-inch reach advantage. He attributed the shift to the fact that he had lost to Diaz via submission when both were contestants on Season 5 of “The Ultimate Fighter” in 2007.

“The game plan went out the window,” Maynard said. “I don’t know; I saw his face and I wanted to fight. It was stupid, but I hope you guys enjoyed it a little bit.”

Asked if he was ready to face Penn, a facially bruised Maynard eschewed “cheesy speeches about masters and killers” and said he would be ready if the UFC wanted it.

Despite railing against Diaz at certain moments in the fight, the live crowd booed the announcement of the decision heartily. Scores were 30-27, 29-28, 28-29.

Diaz successfully baited Maynard into engaging his pitter-patter boxing style, which opened an early cut over Maynard’s right eye and allowed him to slip the undefeated Maynard’s heavy swings. Diaz trash talked Maynard into throwing hands, a move he almost paid for when Maynard clipped him with an overhand right in the second round.

Maynard, perhaps mindful of the Diaz guillotine that finished him on “The Ultimate Fighter,” appeared leery to initiate any grappling, as he refused to follow Diaz down after put him on the mat with a knee in the second frame. Diaz, who gained his fame by winning Season 5 of “The Ultimate Fighter,” seemed to revel in the booing his showmanship began to draw halfway through the fight.

By the third round, there was an appetite in the crowd to see Maynard make Diaz pay for his antics, but he struggled to connect. A stunned Diaz shot at the end of the third, but Maynard insisted on keeping the fight upright. 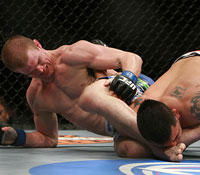 Dave Mandel/Sherdog.com
Dunahm caught Escudero.
A well-matched battle of undefeated lightweights saw several shifts in momentum before Evan Dunham clamped on a vicious armbar that wrenched “The Ultimate Fighter” Season 8 winner Efrain Escudero’s arm and forced him to tap out.

After finding success with takedowns in the second round, Dunham shot on Escudero in the third and transitioned nicely to back mount. Dunham, an Oregon-based wrestler making his UFC television debut, then leaped into a triangle position that allowed him to trap Escudero’s arm and hyperextend it at 1:59.

The conclusion was a big shift from the early moments of the fight, as Escudero landed a flurry of heavy punches out of the gate off of a jumping knee. He hunted for Dunham’s head, but Dunham withstood the barrage, which also included a top guillotine attempt.

Dunham delivered a takedown in the second round that paved the road for solid offensive output, as he laid in punches and telegraphed the same path he took to the third-round finish.

Escudero, who appeared to hang on a bit too long, winced and nursed his arm as he was escorted backstage. Dunham hit a cartwheel in celebration. 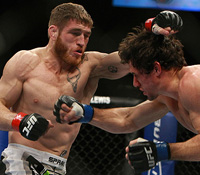 Dave Mandel/Sherdog.com
Simpson edged Lawlor.
Two-time NCAA All-American wrestler Aaron Simpson had a tough row to hoe against the esoteric Tom Lawlor, but the Arizona Combat Sports instructor extend his undefeated streak to seven by picking up a split decision. All three judges scored it 29-28, two of them in Simpson’s favor.

Lawlor poured it on in the first round, as the southpaw put Simpson in jeopardy with several feverish punch combinations. Still, Simpson showed impressive resolve in regaining his composure and coming out fresh in the second round.

“He came at me hard,” Simpson said. “He surprised me a little bit. He hit a little harder than I thought he was going to. My hat’s off to Tom Lawlor.”

Until the final minutes, Simpson struggled to dictate the pace and position of the fight. Lawlor even managed a takedown in the third round. A key for Simpson was his lightning-fast shifting of positions in wrestling scrambles. The crowd was not happy with the decision. The dissenting judge, Jeff Blatnick, gave the first and second rounds to Lawlor. All three judges awarded Lawlor round one. 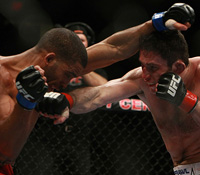 Dave Mandel/Sherdog.com
Sadollah outgunned Blackburn.
Virginia-based Amir Sadollah, enjoying vocal and sustained crowd support, mixed up his strikes nicely in taking a unanimous decision over Brad Blackburn, who suffered his first loss since 2007 in his UFC television debut. Scores were 30-27 across the board.

A straight punch by a cagey Sadollah put Blackburn on skates in the first round. “The Ultimate Fighter 7” winner followed with a forceful teep kick to the face at the close of the period. Blackburn, who promised to “open up a can” on Sadollah in pre-fight comments, calmed things down in the second, though Sadollah still threw in a choice muay Thai elbow against the cage.

The sarcastic but capable welterweight, associated with Team Combat out of Richmond, Va., stuck on Blackburn in just about every position throughout the third round to cap an all-around commanding performance.