LEMOORE, Calif. -- After a shaky start, Rob McCullough battered Isaac de Jesus to a first-round 4:31 finish at Tachi Palace Fights “Stars and Strikes” at the Tachi Palace Hotel and Casino.

McCullough, a former WEC lightweight champion, seemed to be on his way to losing the first round. Late replacement de Jesus was faster and landing the significant punches for the first four minutes, then McCullough caught him with a clean shot and swarmed.

McCullough cut de Jesus with strikes from the top and just kept landing until de Jesus turtled up and the ref was forced to step in.

Welterweight champion David Mitchell had little trouble with challenger Poppies Martinez, putting the local draw to sleep with a triangle choke just 1:32 into the first round.

Mitchell came out and immediately pulled guard, working for a gogoplata before transitioning to an omoplata. Martinez scrambled out, but got caught in the triangle. Martinez looked like he was going to tap, but went out before he could. 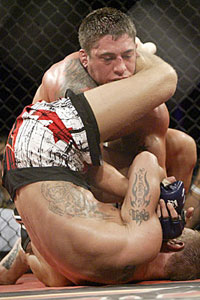 Jeff Sherwood/Sherdog.com
Alessio (bottom) vs. War Machine.
UFC veteran John Alessio put War Machine to sleep at 2:24 of the third round in their welterweight feature fight. Alessio controlled much of the bout from back control looking for a rear-naked choke that War Machine, formerly known as Jon Koppenhaver, defended for two and a half rounds.

Michael McDonald avenged the only loss on his record and became the TPF bantamweight champion by knocking Cole Escovedo out at 1:12 of the second round. McDonald took round one with superior striking and takedowns. Every time McDonald took Escovedo down, he backed off and let him stand, respecting how dangerous the triangle specialist is from his back.

McDonald found his striking range in the second round, chased Escovedo to the cage’s edge with strikes, and then unloaded. Escovedo slumped over and the referee stepped in to save him.

“Ultimate Fighter” veteran Gabe Ruediger took home the promotion’s vacant lightweight title with a dominant TKO victory over previously unbeaten Lenny Lovato in just 3:25 of the first round. Ruediger looked good from the start, controlling the standup battle and rocking Lovato before taking the fight to the ground. Once the fight hit the mat, Ruediger looked for the rear-naked choke, and then pounded Lovato from back control until the ref stepped in.

“Everyone knows me,” Ruediger said. “I finish fights. I come to win every freakin’ time.”