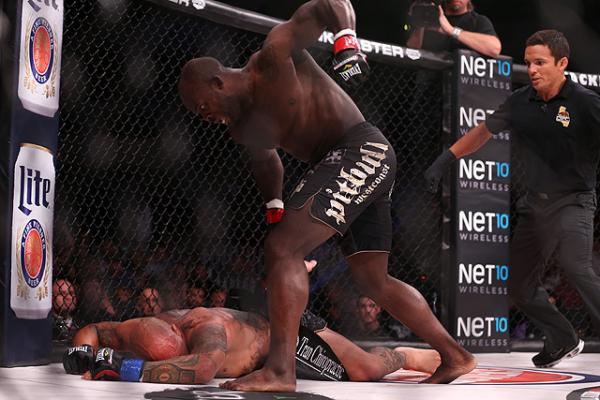 
Melvin Manhoef didn’t need long to announce his presence in the Bellator cage.

The heavy-handed Dutchman put Doug Marshall away via knockout 1:46 into the opening stanza in the Bellator 125 headliner at the Save Mart Center in Fresno, Calif., on Friday night. Manhoef (29-11-1, 1-0 Bellator) clipped Marshall with a right hand behind the ear, instantly rendering the Californian unconscious and planting him flat on his stomach. Manhoef landed one follow-up blow on the mat before referee Jason Herzog intervened to halt the fight.

It was the 27th career knockout victory for the K-1, Dream and Strikeforce veteran.

“I couldn’t ask for anything better,” Manhoef said. “All the respect for Doug. He stepped up. He had the short end of this fight, but I’m very happy to be in Bellator.”

The feeling is apparently mutual. Shortly after Manhoef’s emphatic victory, it was announced that “No Mercy” would receive a 185-pound title shot against the winner of the Bellator 126 showdown between Alexander Shlemenko and Brandon Halsey.

“I want to kiss [Bellator President Scott Coker]. Where is he?” Manhoef said. “I won’t let you down.”

Manhoef was in control throughout the abbreviated contest, blending heavy punches to the head with vicious kicks to the legs. Marshall (18-8, 4-2 Bellator), who has now last two straight fights via knockout, was unable to land anything of significance before the finish. 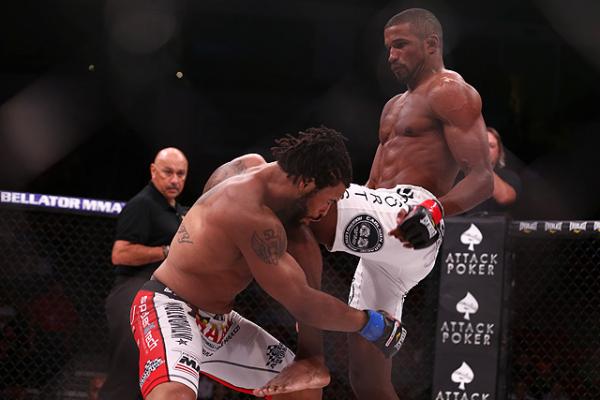 After absorbing some solid punching combinations from his foe in the early going, Carvalho rallied to put “The Professional Predator” away in the opening frame of their middleweight showdown. A barrage of unanswered left hands on a dazed Rogers (11-7, 4-5 Bellator) brought an end to the contest 3:06 into the period.

An unhappy Rogers protested referee Marcos Rosales’ stoppage, but the Ohioan did little to defend himself once Carvalho (10-1, 1-0 Bellator) got rolling.

It didn’t look like things would go the Brazilian’s way at first. In the bout’s opening moments, the shorter Rogers had success tagging his taller foe with left and right hands while moving in and out of danger.

The narrative changed once the 6-foot-3 Carvalho found his range, however. The Rio de Janeiro native turned the tide for good with a left hand over the top, and he proceeded to unload a series of shots on his reeling opponent against the fence before Rogers stumbled, breaking his fall with his hands. As he attempted to return to his feet, Rogers continued to eat punches, forcing Rosales to halt the contest. 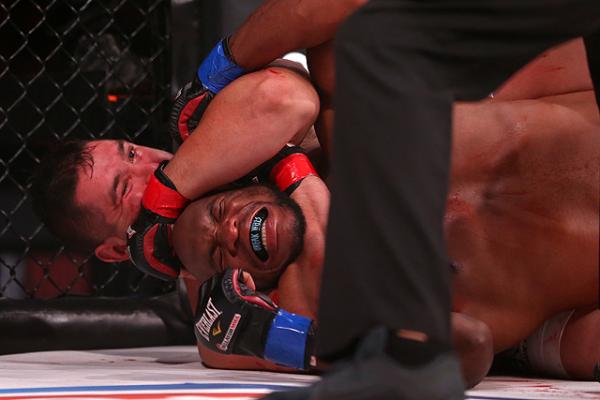 (+ Enlarge) | Photo: D. Mandel/Sherdog.com
Ayala needed little time to put Butler away.
Javy Ayala continued his ascent through Bellator MMA’s heavyweight division, as he submitted Raphael Butler with a rear-naked choke 1:03 into the opening round.

In addition to his win over Butler, Ayala also owns triumphs against Thiago Santos and Eric Prindle within the promotion.

“These last three guys I’ve fought are top guys,” Ayala said. “I just want to let everyone know that I’m here, and I’m going to be one of the top guys.”

The Porterville, Calif., native never allowed Butler an opportunity unleash his formidable standup. Ayala (8-3, 3-0 Bellator) put Butler (8-1-1, 3-1-1 Bellator) on his heels with a two-punch combination at the outset before pressing his man against the fence. Shortly thereafter, “Eye Candy” picked up his 257-pound foe and slammed him to the mat.

From there, Ayala quickly secured his hooks and sunk in the choke, giving Butler no choice but ask out of the fight. 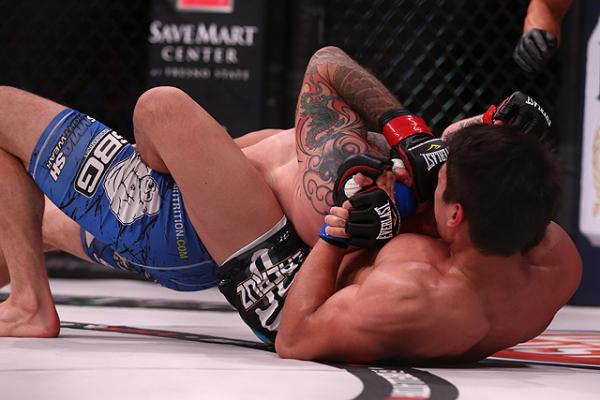 The 21-year-old Japanese grappling ace earned the 14th submission triumph of his career, tapping out Stapleton (13-4, 0-3 Bellator) with a rear-naked choke 4:37 into the opening frame of their 149-pound catch-weight bout.

Ten of Yamauchi’s submissions have come via rear-naked choke.

Stapleton wasted little time moving into his opponent’s world, as the Englishman elected to work inside Yamauchi’s guard almost immediately. He paid for that decision, as Yamauchi (18-2, 4-1 Bellator) transitioned from one dominant position to another on the mat. After threatening -- and failing -- on an omoplata and an initial rear-naked choke attempt, Yamauchi again transitioned to Stapleton’s back and gradually slid his arm under his foe’s chin before increasing the squeeze to elicit the tapout.

“I love the ground game. I’m here to be a champion,” Yamauchi said. “I just want my chance for a title shot. I’m training hard for this moment.”