The main event lasted only 3:19 and provided the crowd with a swift dose of action, as Cruz posted his fourth consecutive victory.

Menne came out of the gate quickly and had de la Cruz on his heels before he planted him on his back with a quick takedown. A veteran of more than 60 professional fights, Menne capitalized on his leverage and delivered blows to his opponent’s face and torso. De la Cruz, however, broke free, returned to his feet and emerged swinging.

The founder of the only mixed martial arts academy in the Dominican Republic, de la Cruz connected on a number of hard punches that sent Menne (43-16-2) to the mat. He continued his assault with overhand punches to the Minnesotan’s face. Menne, 34, returned to his feet but only briefly. Soon after, de la Cruz (5-1) finished his attack and forced the referee to stop the fight.

A striker by trade, de la Cruz will meet the unbeaten Lyman Good -- who delivered a second-round technical knockout against Jorge Ortiz in his semi-final appearance -- in the welterweight final next month.

The Good-Ortiz showdown started with a bang, as Good caught Ortiz’s leg and attacked him with a barrage of punches and knees in the first 20 seconds. A Strikeforce and King of the Cage veteran, Ortiz withstood a second attack from Good in round one but only because the bell sounded. 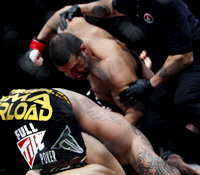 Jason Broaddus/Sherdog.com
Eddie Sanchez stops Jay White.
Good (9-0) opened the second round with a quick takedown. Unable to secure a submission, he elected to end the fight elsewhere. Good turned to his stand-up, as he belted Ortiz with a combination of jabs, opened a gash and delivered an uppercut that put a punctuation mark on the victory. Doctors determined Ortiz (16-5, 1 NC) was unfit to continue, and the match was halted 4:37 into round two.

“He’s a striker,” Rebney said. “He’s worked like a madman on his ground game. He has catapulted himself from not well known to very well known.”

The most memorable fight of the night belonged to Leslie Smith and Kerry Vera, who made her professional MMA debut with her husband, UFC light heavyweight Brandon Vera, cheering her on.

Smith proved a worthy opponent, but Vera (1-0) emerged victorious after three hard-fought rounds. She delivered a number of punishing leg kicks and dropped Smith (0-1) with a right hand in the second round. The crowd showed its appreciation with a standing ovation after the scores were read -- 30-27, 30-27 and 29-28 -- in Vera’s favor.

Meanwhile, UFC veteran Eddie Sanchez dispatched Jay White in just 10 seconds in a preliminary heavyweight tilt. An exuberant Sanchez (9-3) surprised everyone with his post-fight celebration after he flattened White with an uppercut and follow-up strikes. Perhaps best known as the UFC’s sacrificial lamb in Mirko “Cro Cop” Fililpovic’s promotional debut in 2007, Sanchez attempted to leap the cage in one jump, got himself hung atop the fence and looked like he might have done more damage to himself than to White (4-6, 1 NC).