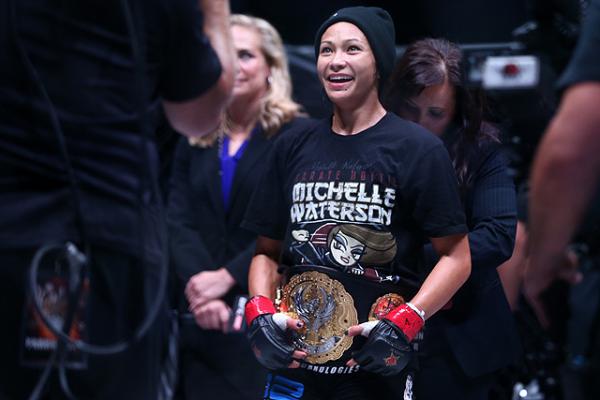 Michelle Waterson had plenty to smile about on Saturday night. | Photo: Dave Mandel/Sherdog.com

Waterson retained her 105-pound title with a stellar performance in the Invicta FC 8 headliner on Saturday, as she dispatched Tamada with a third-round knee strike and follow-up punch at Municipal Auditorium in Kansas City, Mo. The end came 4:58 into round three -- and mercifully so.

Tamada (15-9-3, 0-1 Invicta), who had never before been finished, was never competitive. Waterson set the tone for what was to come with a dominant first round, as she stayed busy with her kicks, tore into the Japanese veteran with savage knees from the clinch and later dropped her with a beautifully timed front kick. Tamada’s situation did not improve as the fight deepened, the champion slowly dissecting her with a diverse and precise standup game. 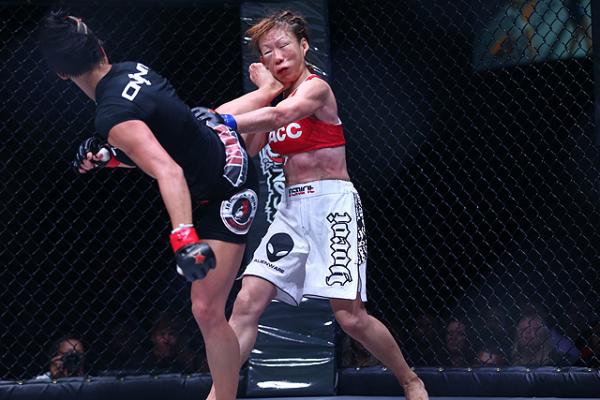 (+ Enlarge) | Photo: D. Mandel/Sherdog.com
Waterson was too much for Tamada.
Late in the third round, Waterson (12-3, 3-0 Invicta) staggered the fading challenger with a wicked knee strike and followed it with a crackling right hand. With that, referee Greg Franklin had seen enough and stepped in on Tamada’s behalf.

In the co-main event, Cage Warriors Fighting Championship veteran Katja Kankaanpaa laid claim the vacant Invicta strawweight championship, as she coaxed a tapout from Stephanie Eggink with a fifth-round brabo choke. Kankaanpaa (10-1-1, 2-1 Invicta) finished it 2:03 into round five, winning for the fourth time in five appearances.

Eggink (4-2, 0-1 Invicta) had her moments. The promising Shayna Baszler protégé threatened Kankaanpaa with a triangle choke and armbar in the third round before stepping on the gas in the fourth. There, Eggink moved to full mount after a failed takedown attempt from the Finland native, forcing her to surrender her back. A steady stream of lefts and rights to the side of the head followed, but Kankaanpaa survived. Her fortitude paid off. 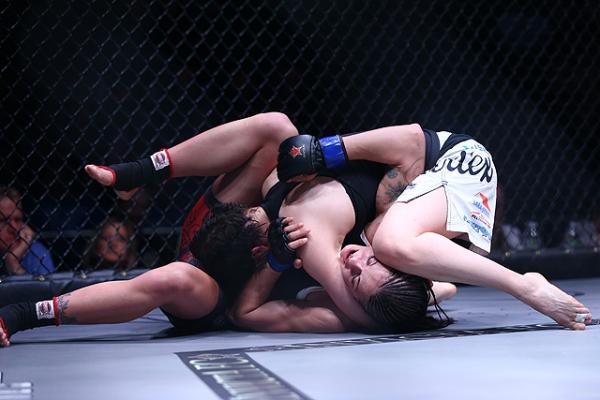 (+ Enlarge) | Photo: D. Mandel/Sherdog.com
Kankaanpaa scored a late submission.
Early in round five, Kankaanpaa struck for a takedown, slid immediately into side control and went to work on the fight-ending choke. She slowly improved her position and tightened her squeeze, forcing the tapout from a dejected Eggink.

Evinger (14-5, 2-0 Invicta) blitzed the Brazilian with takedowns, scoring with three of them. She eventually achieved full mount, dropped fist- and elbow-laden ground-and-pound and framed the armbar. After a brief struggle, Gomes tapped out. The 33-year-old Evinger has won five fights in a row.

Elsewhere, an active and multi-faceted standup attack carried Syndicate MMA’s Roxanne Modafferi to a unanimous verdict over longtime rival Tara LaRosa in a featured tussle at 125 pounds. All three cageside judges scored it for Modafferi (16-11, 1-0 Invicta): 30-27, 30-27 and 29-28.

LaRosa (21-5, 0-2 Invicta) never seemed to get in gear. Modafferi landed more often and with more authority throughout in their 15-minute rubber match, as she mixed power punching combinations with an effective jab and kicks to the legs and body. The 31-year-old “Happy Warrior” floored LaRosa with a right hook in the third round and punctuated her first victory in more than four years with an exquisite counter right hand with roughly a minute remaining on the clock.

The win put an end to a six-fight losing streak for Modafferi.