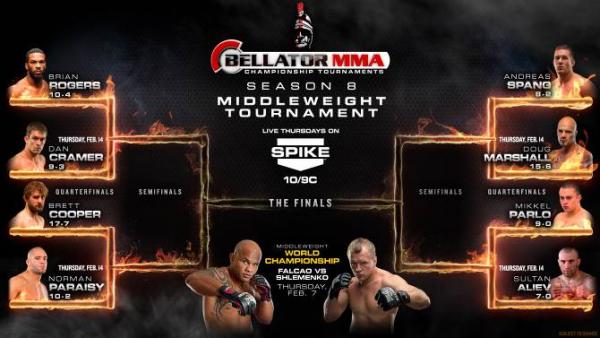 Bellator’s Season 8 middleweight tournament will begin on Feb. 14, as promotion officials announced Thursday that the 185-pound quarterfinals will be contested at Bellator 89.

Brian Rogers, Brett Cooper, Andreas Spang and Mikkel Parlo will all compete in the Season 8 middleweight draw, taking on Dan Cramer, Norman Paraisy, Doug Marshall and Sultan Aliev, respectively. The winner of the tournament receives a $100,000 payday and a guaranteed title shot.

Previously known for his mane of dreadlocks, Rogers has gone 2-2 in his last four fights. “The Professional Predator” has never advanced past a tournament semifinal, coming up short in the round of four in Seasons 5 and 6. Cramer, meanwhile is a two-time UFC veteran making his first tournament appearance in Bellator. “Cosmo” has won five of his last six bouts and last competed on Nov. 16, earning a first-round knockout over Joseph Lamoureux at Bellator 81.

Cooper, 25, rides a four-fight winning streak into first tournament appearance at 185 pounds, most recently taking a unanimous decision from onetime Strikeforce talent Darryl Cobb at Bellator 80. In Paraisy, he faces a 26-year-old Frenchman who saw a 5-0-1 stretch spoiled by Maiquel Jose Falcao Goncalves in the Season 6 quarterfinals this past March.

Spang also competed in the Season 6 draw and ultimately fell to Falcao, relinquishing a unanimous decision to “Big Rig” in the tournament finals after knocking out Rogers in the semis. A former WEC light heavyweight champion, Marshall has fought with mixed results at 185 pounds but earned a scintillating victory in his most recent outing, knocking out Kala Hose in just 22 seconds in his Nov. 30 Bellator debut.

Hailing from Denmark, Parlo has earned nine straight wins to start his pro career. The 22-year-old last competed on Oct. 26, making his Bellator foray with a first-round knockout of Jared Combs at Bellator 78. Likewise, Aliev has yet to taste defeat in eight career outings. The 28-year-old Russian competed four times last year, earning a first-round technical knockout over Lithuanian Arunas Vilius to close out 2012.