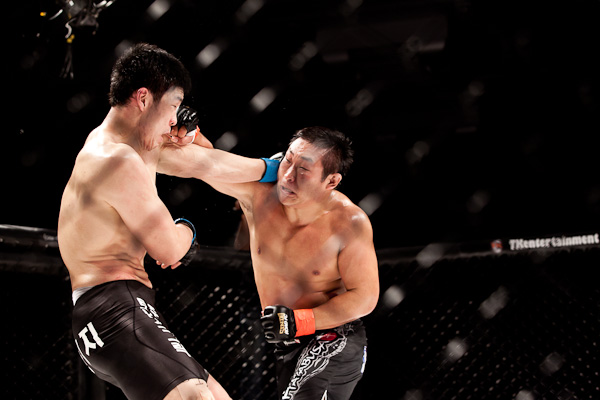 “I want to go out and close the distance, to nullify his reach advantage and fight in close,” commented the thumb-shaped Kim prior to their bout at the Grand Hilton Seoul Convention Centre. “I want to wear him out and then take him down and finish him in the third.”

True to his word, Kim adhered to the game plan in the Road FC middleweight tournament quarterfinal, but things didn’t turn out exactly as expected, as the pairing of two of Korea’s most respected fighters turned into a standup war. 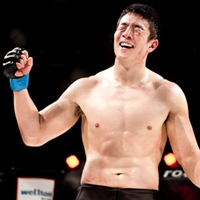 G. Samborski
Lee won an unexpected decision.
Kim held the striking advantage in the first period, as he brought the fight into close range where he could land hooks and uppercuts, while Lee scored sporadic power shots from the outside, most effectively with a push kick-straight right combo that momentarily dropped Kim. There were few jabs and dangerously little defense, as the fighters connected repeatedly with heavy shots that had both of their faces showing the wear by round’s end.

The second frame opened with a heated exchange in which Kim landed the more effective blows on the inside as his superior conditioning became apparent. It was more of the same in the third, as Kim opened the round with a clean overhand right and both fighters continued to swing for the fences, absorbing heavy damage in the process. In a flashback to Lee’s previous light heavyweight contest with Denis Kang, referee Chan Gyoung Choi paused the action midway through the third round to deduct a point from Lee for complaining of low blows, apparently sealing the win for Kim.

However, in yet another of the strange twists that have become the modus operandi of Road FC events, this fight was to have surprise ending when Lee was awarded the unanimous decision. Kim, a former Spirit MC heavyweight and light heavyweight, came in more than six pounds over the 185-pound limit, and a one-point-per-round penalty was deducted for the infraction.

“We’re still close friends,” Lee said of his former training partner after the fight, “so the scoring problems don’t matter so much. It was the main event, so we compromised and made things as fair as we could.” 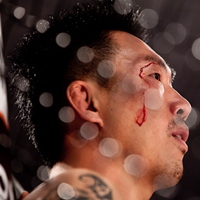 Tournament reserve match action commenced with a display of lethargic boxing in which Team MARC fighter In Ho Cha seemed to confuse the ability to feint punches and absorb punishment with the ability to throw punches and deliver it.

At the final bell, it was Korean Special Forces veteran Jong Dae Kim who connected with just enough jab-straight combinations and haymakers to bring home the unanimous decision victory.

Though the Kim-Cha fight did much to illustrate the skill discrepancy between the main draw and reserve matches in the middleweight tournament, it was reserve fighter Ji Hoon “Tank Boy” Kim who lived up to his moniker in spades by coming in 14 pounds overweight, virtually handing his full fight purse to M-1 Global and Gladiator Challenge veteran Dool Hee Lee.

As it stands, “Heavy Metal” Lee and Son have advanced to the tournament semifinals, with Dool Hee Lee as the clear favorite among alternates. The bottom bracket of the quarterfinals has yet to be finalized for Dec. 3’s Road FC 5, which will mark the return of MMA to Seoul’s Jangchung Gymnasium. One possible source for middleweight talent is Singapore’s One Fighting Championship, with whom Road FC recently entered into a partnership to co-promote events in Korea. Another source is, of course, Denis Kang, who is coming off a light heavyweight loss to Team Posse fighter Seung Bae Whi and has expressed his desire to return to middleweight in future Road FC events.

“If Denis Kang enters the tournament, it’s just fine by me,” commented the soft-spoken Heavy Metal Lee, who lost a close, penalty-ridden decision to Kang at light heavyweight in April. “I’ve got no opinion on it one way or the other. He’s just another guy standing between me and championship.”

In the evening’s non-tournament co-main event, it was Korea versus Japan in a 150-pound catchweight contest which pitted “Korean Pitbull” Doo Won Seo against Yasuhiro Motomura. The contest commenced with a barrage of technical punch-kick combinations, but it was a low blow midway through the round that brought the crowd to life and consolidated it against the Japanese fighter.

Shortly after action resumed, Seo hurt Motomura with a hard overhand right, only to find himself stalled out in the stunned fighter’s rubber guard. Following an armbar attempt, Seo’s down-the-pipe striking from open guard rendered Motomura unconscious at just 2:54 of the first round. With the knockout, Seo extended his win streak to five straight.

In other non-tournament action, lightweight “Korean Bulldozer” Yui Chul Nam took home a hard-fought decision against Japanese journeyman Tomoyoshi Iwamiya. All three rounds played out as a classic striker versus grappler affair in which Iwamiya, who boasts a combined record of 5-7-3 in Pancrase and Deep, saw occasional success by scoring takedowns. However, it was glimpses of the brawl-and-gas style which characterized Nam’s run as Spirit MC welterweight champ that swayed the judges.