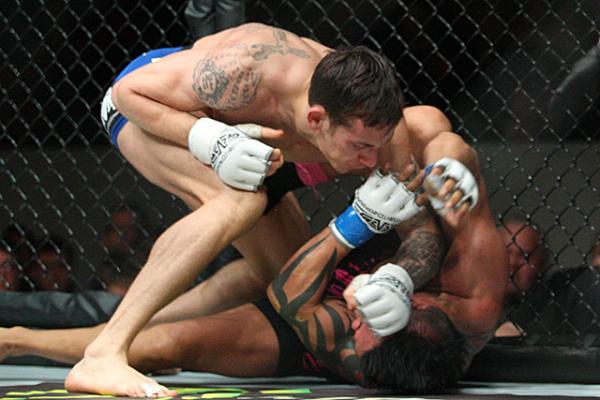 
“Ultimate Fighter 16” runner-up Mike Ricci wasted no time in dispatching veteran Jorge Gurgel at Titan Fighting Championship 27, pounding out the veteran in the first round of their lightweight main event from Memorial Hall in Kansas City, Kan.

Gurgel hit the cage in typical aggressive fashion, but Ricci easily countered the veteran’s wild punches with a well-timed takedown. The 37-year-old would never return to his feet, as Ricci controlled him from top position and pounded away with punches and elbows, his strikes gradually increasing in intensity and lacerating Gurgel across the forehead. Eventually, the clean blows landed with such regularity that referee Chuck Wolfe had no choice but to halt the contest, waving off the bout 3:57 into round one.

Riddle seemed hell-bent on earning a takedown in round one, but it was actually Kuiper who put the American on his back, surprising Riddle with a driving double-leg. The judoka tried to turn the same trick in the second stanza, but “Deep Waters” was ready for him, turning the tables with a beautiful switch and taking Kuiper’s back. Though Kuiper was able to escape the position and scramble to his feet, Riddle would quickly grab a power guillotine, arching his back and driving his forearm into Kuiper’s windpipe to elicit the tap.

“I’m extremely athletic. I wasn’t expecting him to be as strong and as fast as he was,” said Riddle. “I really like to scramble. The second you grab my leg and give me some distance, I’m already looking for my next move.”

After dominating Eric Marriott through most of their lightweight contest, UFC alum Kurt Holobaugh survived a third-round scare to walk away with a unanimous decision win. Holobaugh controlled the fight’s pace from jump street, rocking Marriott with a hard left hook in the first frame and then attempting a mounted guillotine. Round two would bring much of the same for Holobaugh, who used superior athleticism to score takedowns and outmaneuver Marriott on the mat. Trailing in the third frame, Marriott managed to turn the tide with a crisp one-two that put Holobaugh on his seat. The 28-year-old could not capitalize, however, and all three cage-side judges sided with Holobaugh, awarding him scores of 29-28 and 30-27 (twice).

Earlier, Kevin Croom took a unanimous decision from Bryan Goldsby in a battle of ex-Bellator talents, earning scores of 30-27 (twice) and 29-28 to pocket his ninth consecutive victory. Though the bantamweights traded takedowns in the first frame, it was Croom who would control the wrestling battle in the bout’s final 10 minutes. Despite Goldsby’s effectiveness in the standup, he could not keep “The Hard Hitting Hillbilly” from taking him down, a fact that ultimately cost him the fight.

“Ultimate Fighter 18” alumnus Anthony Gutierrez made quick work of 20-fight pro Charlie DuBray to kick off the show’s televised card on CBS Sports Network, submitting the Nebraskan just under one minute into the opening period. Though DuBray caught a low kick and scored a takedown just seconds into the bantamweight contest, Gutierrez met him with an able rubber guard, trapping DuBray’s head and securing a fight-ending triangle choke.

Bellator vet Kalvin Hackney punched out Justin Robbins at 2:12 of the third round in their featherweight contest, while Illinois flyweight Bill Friday locked in a third-round guillotine at 4:28 to top Kenneth Porter.

In amateur action, Josh Reed punched out Jordan Casterline 42 seconds into round two of their middleweight contest, while Hannah Zeciri and Aaron Goldfield earned unanimous decisions over Florina Moeller and Fernando Andrade, respectively.