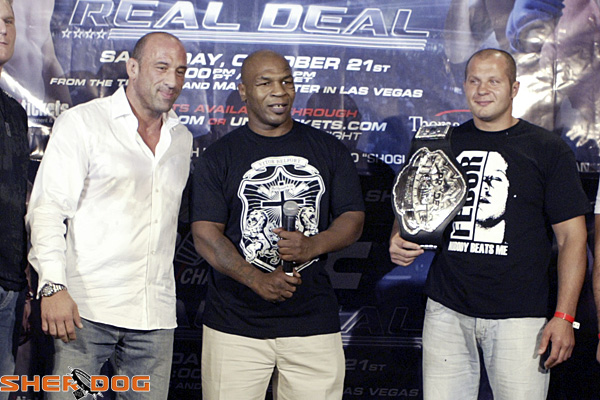 
Though the term “Baddest Man on the Planet” has been bandied about flippantly in mixed martial arts discussions over the past several years, the man who inspired the nickname will likely always be regarded as the true holder of that title.

Mike Tyson was the original “Baddest Man on the Planet” and remains a vivid part of boxing’s history due to his vicious knockout power and polarizing behavior. A the age of 20, the Cus D’Amato-trained pugilist became the youngest heavyweight boxing champion in history by knocking out Trevor Berbick in 1986, battering his foe with shots he would later describe as “hydrogen bombs,” according to the Los Angeles Times. Tyson would eventually unify the WBC, WBA, IBF and “The Ring” heavyweight titles to become the division’s undisputed emperor before a shocking upset at the hands of James “Buster” Douglas and a rape conviction cost him both his titles and his freedom.

The question has been posed countless times on MMA message boards: How would Mike Tyson have fared had he competed in the UFC?

According to the Brooklyn, N.Y., native, not very well. When asked by “UFC Tonight” host Chael Sonnen how he would have done in a fight against then-UFC tournament champion Royce Gracie, Tyson said he would not have possessed the technical tools to earn a victory against the grappler.

"Well, in '93, I was in prison, so there wouldn’t have been a fight, but there is no way I would have won,” said Tyson. “I had no idea what was going on with that type of fighting and would’ve been taken by surprise. I would have had to train in that particular art of fighting before that happened. That’s a particular art. You’re not going to go in there with just your hand and not have a great ground game. You also need a great wrestling game to be successful, and you won’t be exciting, as well. You have to have both games. You have to know how to wrestle and box. That’s just the truth."

As Tyson said, he was behind bars at the time of Gracie’s initial UFC dominance. However, had no-holds-barred fighting been popularized a few years earlier, the former heavyweight boxing champion believes he might now be looked at as a former Octagon combatant rather than just a fan of the current sport.

“That would have been awesome,” said Tyson. “I think I would have [tried MMA]. My ego would have told me I’m the best fighter in the world with all the particular fighting aspects, and I would have tried it.”