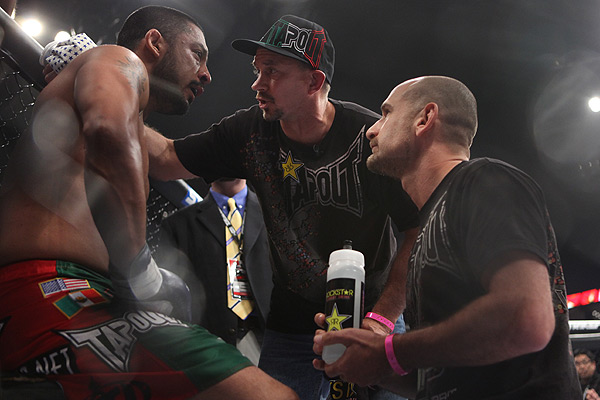 
For the first time in his seven-fight UFC tenure, Diego Brandao did not receive guidance from coach Mike Winkeljohn heading into his UFC Fight Night Dublin matchup with Conor McGregor.

Instead, Brandao conducted his entire camp in San Antonio under Rodrigo Pinheiro. The change in scenery did not help “The Ultimate Fighter 14” winner, however, as he was stopped by McGregor at 4:05 of the opening frame of this past Saturday’s headliner at O2 Arena in Dublin.

Although he was not in the Brazilian’s corner, Winkeljohn remained an interested observer.

“It was a tough fight to win. Conor’s really good at what he does,” Winkeljohn told Sherdog.com. “Diego was just not quite close enough to reach him with some of his looping shots, which would be one of the ways to beat Conor. And he needed to finish his takedowns and get him to the ground. I know Diego wanted to get a lot of jiu-jitsu time in and felt he had the advantage there. It didn’t play out the best for Diego. When he’s on, he can go with anybody out there. We’ve just got to get him back to being on.”

Winkeljohn’s use of the word “we” suggests that there are no burned bridges between Brandao and the Jackson-Wink MMA camp. While he has not heard from “DB” since the fight, Winkeljohn says the gym’s doors are always open. Before facing McGregor, Brandao held about half of his camp in San Antonio prior to losing to Dustin Poirier at UFC 168 last December.

“Friends and family, a lot of things behind the scenes made Diego leave -- definitely not on our side or our relationship with Diego,” Winkeljohn said. “We love having him around; he’s so intense. Like I said, Diego Brandao, when he’s on, he can go with anybody. But I know he really wanted to get back to a lot more jiu-jitsu and a lot of people he worked with in the past. I know that was his plan.

While conditioning is the popular topic surrounding Brandao’s struggles in the Octagon, Winkeljohn contends that stamina is only part of the story. According to the striking coach, Brandao is often plagued by a desire to do too much, and that has cost him in each of his last two fights.

“A little of it [has] to do with the conditioning. I think Diego has always had the tendency to overtrain: do too much on one day and then go hard again the next day. Most of these guys, they want it so bad, they think more is better, where sometimes they need to pull back, let their bodies rest,” he said. “Because what happens is they’re so overtrained, they’re actually sparring or competing in a practice. They gas, and now they believe they’re gonna gas in their fights. They don’t understand what rest does for them. That process makes them second guess a lot of their moves. Overtraining is probably his biggest downfall.”

Although the result was probably not what he would have liked, Winkeljohn, like much of the MMA community, was thoroughly impressed with McGregor -- both as an athlete and as an entertainer.

“I come from the striking world. I love the accuracy, the timing that he has, the confidence to sit in the pocket and throw and just let those punches miss him by [inches], but he knows he’s going to find that chin. That’s hard to do. Most people want to close their eyes in there. Cub Swanson’s one of the only guys we have that has those abilities, but I think at an even higher level [than McGregor],” Winkeljohn said.

“As far as marketing goes, I think he’s a genius. You’re only in the sport for so long, and he’s gonna make the best of it. I think a lot of other people should take note and make some money for themselves and their family.”